star wars #26 begins with an Imperial Unity Day parade on the hub planet of Bar’leth, which is quickly interrupted by a surprise attack from the Rebel Alliance. After months of racing in the aftermath of the Battle of Hoth, the Rebellion desperately needed this victory – and they made sure to get it where the whole galaxy could see, as this event was being broadcast on the holonet. With that in mind, there’s an upbeat little celebration once the fleet regroups elsewhere in space, but another sober briefing with Admiral Ackbar and Mon Mothma reminds our heroes that bringing down the Empire for good will still be long and difficult… fought. We then cut to a secret Imperial location, where a BSI agent arrived to inspect local security protocols. Detail-minded Star Wars fans will likely immediately recognize where we’re supposed to be once they’re introduced to Moff Jerjerrod – longtime faithful will remember what project he was responsible for. But the point here is to introduce us to two Imperial grunts: a cargo shed worker and a data processor, who turn out to be sleeper agents working for Lady Qi’ra’s criminal organization Crimson Dawn. Despite the station’s tight control over communication, they receive a coded message from Qi’ra activating them and telling them to wreak havoc wherever they can behind closely guarded Empire lines. Naturally, they’re working on the one major project the Rebel Alliance would definitely like to know about, so they decide to pass this information on to them at any cost. 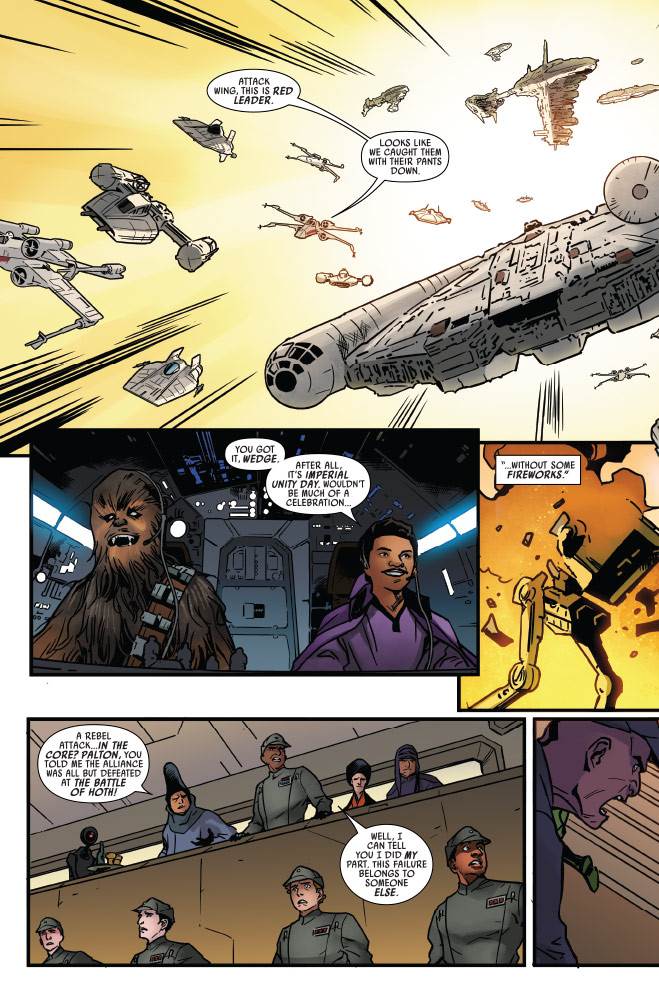 It’s always fun to see which direction Charles Soule (and fellow creative powers Marvel and Lucasfilm) decided to take the flagship. star wars following title, and this bow throwing problem is definitely no exception. As we tiptoe closer to the events of Return of the Jedi, Soule began to sprinkle in small details that point to the climax of the original trilogy and gradually put pieces in the places where they need to be for Luke Skywalker to finally build his own new green-bladed lightsaber and head to the Jabba’s palace on Tatooine to save his friend Han Solo. But the other novelty that appeared unexpectedly in star wars #26 est l’art– this title brought in a new artist by the name of Andrés Genolet (formerly of Ms. Marvel) and I must admit that I was hesitant to adopt his style at first, but it gradually grew on me as the issue progressed. Sometimes his expressions are a little too exaggerated for this slightly more serious take on Star Wars storytelling, but when he gets that instinct under control, I think his artwork is pretty decent. As we rush into this fall hidden empire crossover event, I’m extremely curious to see how Soule and company navigate their ship to known and unknown destinations in the Star Wars galaxy. star wars #26 is now available wherever comics are sold.