Committed Comics has been a mainstay at San Diego Comic-Con since 2000, just a year after its official inception. They continue to break boundaries in the field of independent comics with a growing list of creators and alumni that includes both Camilla D’Errico and Dustin Weaver.

You can find them at Small Press #L-09 on the show, where they’ll have exclusives, signings and more. Here is their signature program:

This year, they will have three limited exclusives, including:

Mog Park (game of thrones artist, cover artist Independent Comic Company Queen and foodie) created this beautiful cover for the Nira X: REBORN #2 Kickstarter campaign. The cover was beautifully colored by Wilson Ramos Jr (Marvel, Tokyo Pop, Papercutz). The image shows Nira X and Evil Nira X preparing for war with a very strong Asian influence in their surroundings. The print measures 9″ x 14″ and the red of Nira’s costume is covered with foil which brings out the color and the image. It’s limited to 22 copies (since it’s SDCC22) and Mog will be on hand to sign the print.

The last chapter of Nira X: REBORN has been said and at San Diego Comic Con 2022 you have the first opportunity to pick up issue #3. Committed Comics will have copies of the main cover as well as some of the limited variant covers. Come and discover the works of Ale Garza, TriStarr, Lena Dai, Kat Mau and even the creator of Nira, Bill Maus. Prices range from $15 to $40. There will also be a limited supply of issue 2 variant covers that debuted at Comic Con Special Edition. 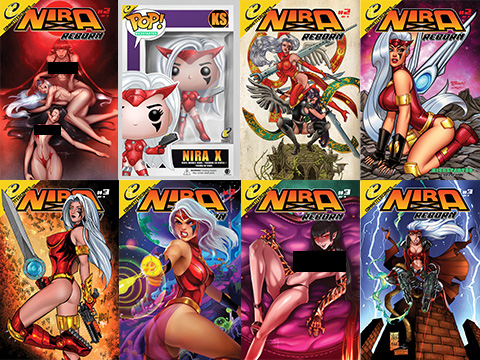