Multiversity’s history column breaks the format a bit this week. Instead of scanning multiple events from decades ago, I’m going to track a recent event. Today marks the first anniversary of comic distro, a distributor with a revolutionary approach to product delivery. Where does it come from, how has it grown since its launch and what future does it have?

Comic Distro’s roots date back to 1979 in Houston, Texas when founder Austin Osueke was born. His early years were spent creating his own comics based on animation and comic book characters, but he wasn’t introduced to comics until his mother bought him a copy of ” Uncanny X-Men” #283 in late 1991, just after turning 12. Before long, he discovered “Wizard” magazine and was the target audience for the industry boom of the early 1990s. He dived in the hobby, enjoying superheroes, “Groo” and “Maus” with equal pleasure. Like everyone at the time, he was a fan of Jim Lee. The creation of Image in 1992 had a major impact on Osueke, inspiring him to one day become his own publisher.

An equally influential moment from the same era was Osueke’s first experience with manga. Until 1992, Viz reprinted the late ’80s Eclipse series “Xenon: Heavy Metal Warrior” in four trade paperbacks. This exposed Osueke to the original Eclipse publications, which were released in the standard comic book format instead of the modern, thicker tankoban format. As Osueke moved away from superheroes later in the decade, the manga kept him involved in the comics. Because of the manga, he took a Japanese class in high school, where he was introduced to anime. He created dragon ball z fan fiction and eventually shared some of his material with a comic book publisher at a local comic book convention. The editor was encouraging, motivating Osueke to pursue the dream further.

Being the late 1990s and the era of internet bubble, it was natural for Osueke to combine the Internet and publishing. While attending San Francisco State University for Business Management in 2000, he founded eigoManga, a website where he and his friends could share their manga-influenced material. The name literally translates to “English Language Comics”, and one of the biggest challenges Osueke and others faced was the resistance to manga material by non-Japanese creators. Apart from inflammatory comments from readers on message boards, eigoManga has also been mocked by industry professionals at Viz.

Despite this, eigoManga persisted with high quality material and its best features found their way to print editions carried by retailers like Tower Records and Borders Booksellers. In 2005, a partnership with Devil’s Due helped them further penetrate the comic book market. Remembering how much he enjoyed the format of “Xenon”, all eigoManga material was published in the standard comic book dimensions and page count. Osueke continued to promote digital distribution methods, including a highly publicized keynote speech at Anime Expo 2009 following a policy change at Diamond Distribution that has many independent comic creators worried. After touching alternative distributors like Haven or SLGand online platforms like Keenspot or drunk duckhe went on to describe a concept that would allow readers to purchase a comic after reading a digital snippet.

Over the years, Osueke has monitored, supported and contributed to online distribution companies like Comixology and Crunchyroll. He gained experience in publishing by finding ways to get eigoManga books into schools and libraries. He made contacts in the industry who shared his frustration with Diamond’s role as gatekeeper to the direct market, controlling which books would be available for purchase. He continued to talk about the online distribution possibilities at congresses. In 2021, he was ready to launch his vision as a new business – one that would offer other publishers an alternative to Diamond: comic distro.

At a glance, April 2021 doesn’t seem like the perfect time to start a business. The Covid-19 pandemic was about a year old and the Delta variant was emerging as a new concern. Vaccines were becoming widely available, but only about a third of the US population had received full doses. Inflation was beginning to appear, although we were told it would only be transitory. Most people still thought it was time to hunker down and play it safe. Again, most people are not entrepreneurs.

From another perspective, April 2021 was the perfect time to start a comic book distribution business. Diamond’s brief closure in the spring of 2020 reminded everyone how fragile the direct market system was, as retailers and publishers who were otherwise able to operate had little or no options for obtaining new products. DC quickly upended the status quo by leaving Diamond for two upstart distributors, Lunar and UCS. Six months later, Marvel moved from Diamond to Penguin, followed by IDW soon after. Diamond, who was struggling financially before the disruptions of the pandemic, appeared to be on very shaky ground. Historically, the best time to enter an existing market is during disruption, not stability.

With the help of independent technical support Kishan Dodiya, Osueke built a new online platform. With guidance from retired bookseller Dianne Edmonds and toy distributor Paul Astwood, he developed a distribution model. Comic Distro was launched as a print-on-demand system where publishers could upload versions of their material and retailers could create an account to purchase whatever they wanted. The comics were printed by Robinson Anderson Print and Fulfillment, the California company that has printed eigoManga material for many years. One of the main benefits of Comic Distro is that all of its titles are available to order continuously and there are no storage fees. Prices and printing details are all set by the publisher.

From the start, Comic Distro offered titles from eight publishers, including eigoManga and Spoof Comics. A press release was sent out to various outlets, generating a flurry of coverage from sites like cartoon beat and Cold blood. The new distributor received a surprise less than a month later when Tidal Wave Productions join the platform and has made its complete back-catalog available. Osueke envisioned Comic Distro as a tool for small or new publishers to gain a foothold in the industry, so the backing of a larger, established publisher like TidalWave motivated them to maintain and grow their model to support more important partners. TidalWave also introduced Osueke to Toledo Global Services, a Canadian print-on-demand service that aligned with the distributor’s needs for its expanding business model.

After its launch, the Osueke team initiated meetings with the Nigerian publisher comic republic. International publishers are one of the market segments that Comic Distro was designed to appeal to, and Osueke was determined to show he could help them overcome the logistical challenges of North American distribution. Comic Republic added its titles to the Comic Distro catalog in June, and the momentum continued. In September, Comic Distro added Argentinian comic book publisher UMC Comics and has exceeded its 500th catalog item. 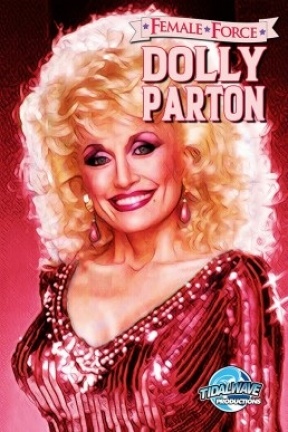 A year after its launch, Comic Distro now has over 600 comics from 24 active publishers. Their most successful products come from genres outside the mainstream of comics, such as biographies. Their most popular item was their Books Dolly Parton from TidalWave. One of Comic Distro’s unique features is its messaging system that allows publishers and retailers to communicate directly. There are currently 18 active retailer accounts, including some outside of comics. Comic Distro is also in regular contact with over 40,000 book and comic book stores, some of which prefer to receive personalized title listings instead of browsing the full catalog.

Osueke is pleased with Comic Distro’s performance so far, and plans for the future are simple and achievable. He wants to continue growing and plans to build a sales team to provide better service to retailers and publishers. He also heard of a large segment of readers who would like to purchase their books directly, rather than trying to convince their local comic book store to open an account. It wasn’t an avenue Osueke had planned, but it’s one he’s investigating. After all, helping others get what they want has been the foundation of her entire career.