Welcome to Image30, Comic Watch’s celebration of three decades of Image Comics! Throughout 2022, each week we’ll be looking back, in chronological order, at the comics that made the publisher the powerhouse it is today and changed comics forever! In doing so, we hope to paint a clear and definitive picture from a finished product perspective, how the company was born, grew, evolved and transformed into the diverse juggernaut it is today.

In March 1993, Image Comics was a certifiable commercial success as a company and critical esteem began to rise as more and more titles began to take shape. Jim Lee’s imprint, WildStorm, has already had success with WildC.AT– a privately funded covert team full of aliens and half-breeds fighting a centuries-old war – but it was clear that this team needed a bookend to create a fully integrated universe with its own internal continuity . Enter StormWatch. While the WildC.ATs primarily gained their powers from alien ways, the members of StormWatch were enhanced humans. The private funding of WildC.AT gives way to the United Nations sanction of StormWatch, with all the good and bad that comes with it. The two teams are polar opposites in composition and structure, but extremely similar in mission statements and tactics. As WildC.ATs StormWatch was started by Jim Lee, Brandon Choi and Scott Clark, but would soon see Ron Marz and Brett Booth continue the first volume.

Characters out of the gate were international, similar to the X-Men relaunch in Giant Size X-Men. An Irish cop, a former Spetznaz officer, a gassy Japanese man and a loud Italian girl walk into a satellite and you have Hellstrike, Winter, Fuji and Diva from the original StormWatch lineup. Add Weatherman, Henry Bendix, who basically ran communications and intelligence, and Batallion, telekinetic field commander Jackson King, and you have a team ready to strike superpowered threats across the world at a moment’s notice. And so went the early days of the week’s monster-type missions and encounters. 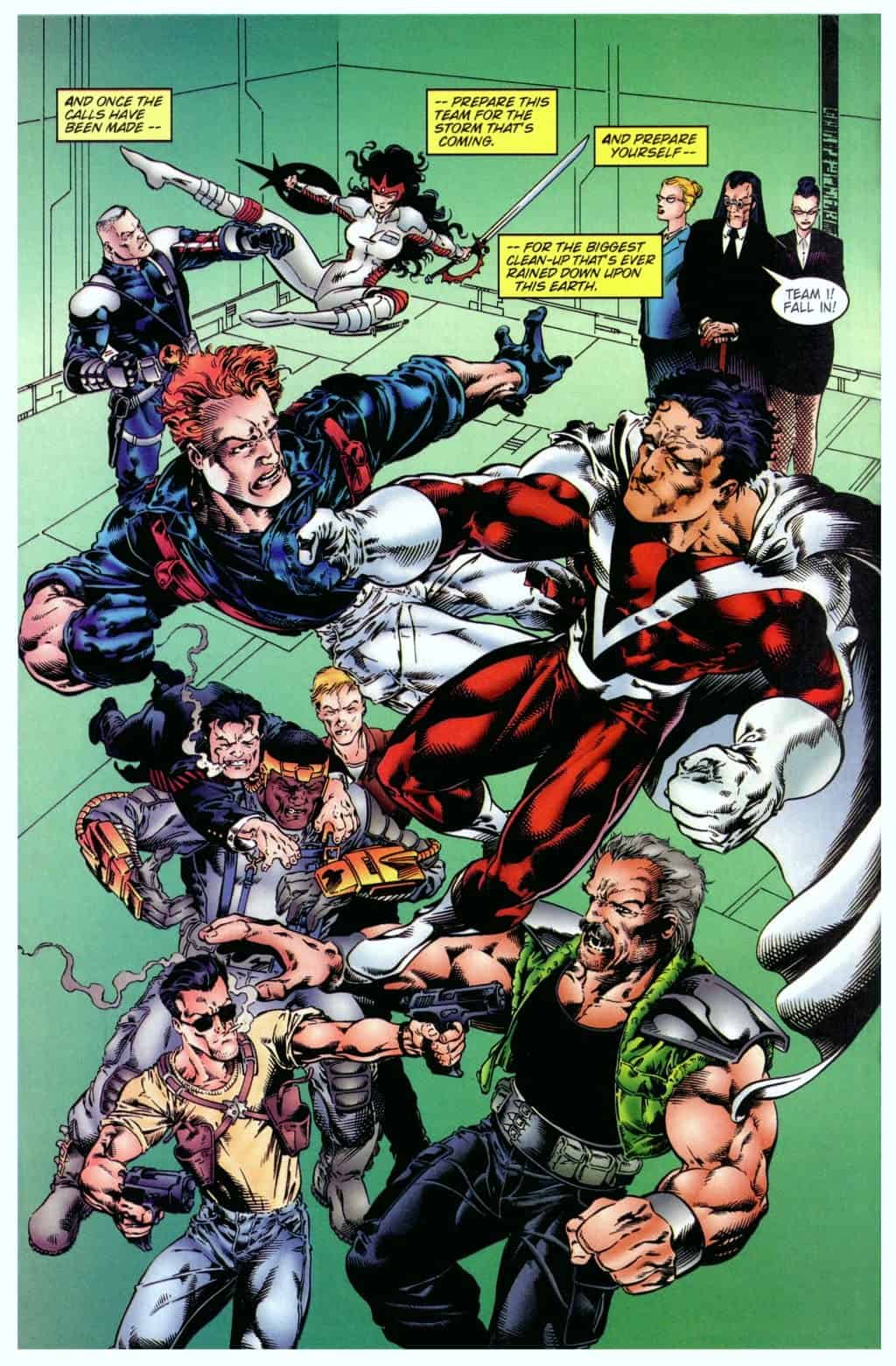 A watershed moment came for WildStorm in 1995. While Marz was on Storm Watch and James Robinson wrote WildC.AT, a two-issue miniseries launched that would change the face of the imprint forever. Team 1: WildC.AT (written by Robinson) and Team 1: StormWatch (written by Steven Seagle) explored early concepts for both teams in the mid-1960s. The team introduced mainstays of both later teams, from Zealot and Backlash to Bendix and Jackson King’s father Isaiah, and created a depth of shared story in the hitherto unseen WildStorm universe. By uniting the two flagship titles with said shared continuity and attention to detail, the WildStorm universe, as many of us have known it, was truly born in this moment, paving the way for much of the praise. of criticism that we would see later in the books. like Authority, Planetary, and Sleeper among others.

And speaking of that later critical acclaim, we come to the point where we need to talk about the elephant in the room. In July 1996, British writer Warren Ellis took over StormWatch vol.3 with #37 and completely revolutionized superhero comics of that era. Given the revelations of recent years, it would be irresponsible not to raise the issue of Ellis as a person, with dozens upon dozens of women coming forward with accusations of grooming, sexual misconduct, horrible power, gaslighting and harassment. After a long hiatus, Ellis has slowly come back into the public eye lately and one can only hope he’s been sincere in working with these various victims to atone for his behaviors, but I can’t speak to that personally. What I can talk about is Warren Ellis, the writer, and what he did with Storm Watch over the next few years, the superhero’s course changed in the 1990s, and the effects of his work from that era are still being felt, for better or worse, today. 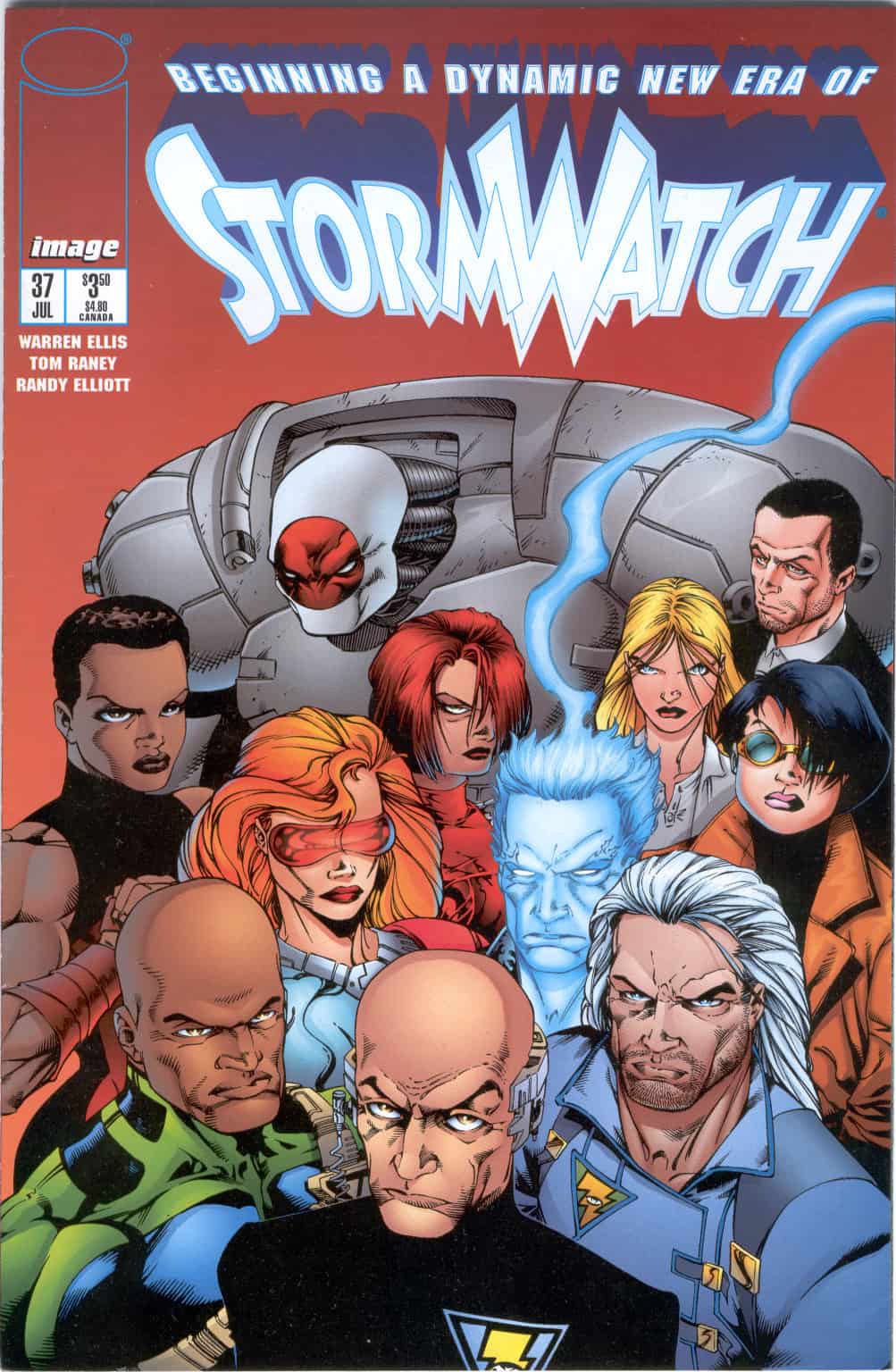 Much of the American superhero genre had begun a slow spiral towards antiheroism, which is understandable after the great success of the works of Frank Miller, Alan Moore, Larry Hama and many others writing solo heroes. darker, grittier and ready to bend the rules to ensure the right outcome. I remember the recent HBOMax DCU series, Peacemakerwhere our titular protagonist says his mission is “to secure peace…to any Cost.” As more and more titles were inundated with similar philosophies, however, the concept began to lose its teeth. Ultra-violence and big guns reigned supreme but the Why of it was eclipsed in the homogeneous masses of titles. What Ellis and Tom Raney (initially on art during this run) have done is embrace ultra-violence but simultaneously question its effectiveness. It was an apparent understanding that the world was a very different place than the Golden or Silver Age of superheroes. The face of evil was no longer the black and white of a Hitler or a Pol Pot, but rather the structures, the policies, the economy of a world where the value of diamonds in a nation produces tens of brutal warlords with no global notoriety outside of their own war. torn territories. After pruning about twenty-five issues of these notions into two volumes of StormWatch, Ellis would write Authority, picking up Jenny Sparks, Jack Hawksmoor, Apollo, the Midnighter and several other concepts he created during his previous run to write a book that is widely regarded as one of the greatest superhero stories of the last fifty years. But we will come back to this later.

StormWatch continued to have a legacy even after Lee brought WildStorm to DC Comics in 1998, but never quite to the heights it reached in the mid-1990s. StormWatch: Team Achilles, a team of all human agents, in an interesting but ultimately slow-paced series that was never finished. StormWatch: Post-Human Division (PHD) was a later attempt by DC to revive the original concepts and resurrect several deceased characters that received mixed reviews, alongside the rest of this universal relaunch. In the New52, DC attempted to fully integrate the WildStorm universe into the DCU with… varying results. This newly launched StormWatch team would be linked to another New52 title demon knights as an extension of a long-standing team of earth watchers. It’s more like a watered down version of The Authority, with the main link to the DCU being the presence of Martian Manhunter on the team. Compared to other WildStorm-centric titles, such as Voodoo, Donor and Team Seven, New52 Storm Watch fell significantly short of his legacy.

With the recent appearances of Grifter, Zealot, and the WildC.ATs in current DC titles, it remains to be seen if another attempt to resurrect Storm Watch will come soon. One can only hope that an attempt is made, however, as StormWatch is one of the cornerstones of the WildStorm universe and has played an important role in the evolution of Image Comics.

NEXT WEEK! Image flaunts his growing A-list status as Spawn and Batman team up! MORE: As Portacio finally publishes WetWorksas the latest Image founder to release his own comic, haters point to the so-called “image purge” as proof that the company’s days are numbered, and Image X-month confuses just about everything the world.