The Multiversity History Column returns with three new articles from the annals of comic book history, all themed around the month of November. Enjoy!

November 1967
By 1967, it was clear Marvel was gaining market share at the expense of the long-dominant DC. It didn’t sit well with DC, prompting a lot of soul-searching. DC publisher Irwin Donenfeld compared sales figures to cover illustrations and discovered that two of their best-selling books, “Detective Comics” and “Flash”, were illustrated by the same artist: Carmine Infantino. Inspired, Donenfeld had Infantino pull the interiors after “Flash” #174 (cover dated November 1967) and assigned all DC covers to him.

Infantino’s natural sense for cover design was at the top of the pack, and Marvel head Stan Lee noticed the change. Perhaps fearing the move might be successful, Lee attempted to cut it at the knees by offering Infantino a $3,000 raise to come to Marvel. Infantino was making $19-20,000 at the time, so that was a pretty big 15-20% raise. He discussed the offer with Donenfeld, who said DC couldn’t match it. Infantino gave notice to his DC editor, Julius Schwartz, and news of his defection made its way through the DC offices. When DC head Jack Liebowitz found out, he invited Infantino over for lunch. They had a casual chat while they ate, then Liebowitz suggested Infantino stay at DC as editorial and art director with a $30,000 raise.

November 1993
The early 1990s was a time of great angst and darkness in comics. Superman is dead. Batman broke his back. The Punisher was popular enough for three monthly titles. Amid this deconstruction of the superhero archetype, “Marvels” shocked the world.

It should have been a miss. Kurt Busiek was a writer who had taken minor gigs in the industry for 10 years but had no major hits and was relatively unknown. Alex Ross was a newly minted comic book artist, having done only one miniseries for NOW Comics and a cover for a Superman prose novel. The material was a tribute to the Silver Age, heroes being heroes. The main role was a new character, and just a simple photographer. To top it off, each issue of the miniseries was $5.95 per issue at a time when the average comic was around $1.25.

The cost was increased to support the comic’s acetate covers. “Marvels” was the first comic to implement acetate technology, but wasn’t the first to try it. Marvel had previously promised it would be used in April 1992 on the first issue of “Cage”, but failed to deliver. Marvel’s terms of service meant the issue was refundable as it wasn’t as promised, but retailers who bet heavily on it still found themselves with funds tied up in a product they were struggling to sell as returns took weeks to process. Many of them were probably tired from getting burned twice.

“Marvels” was a smash hit that inspired a phase of nostalgia-driven backward-looking books, including DC’s “Kingdom Come” by Alex Ross and Mark Waid. Demand was strong enough for a paperback collection in 1995, which was named Best Book for Young Adults by the American Library Association in January 1996. This prompted a second printing of the single issues in 1996 (@2.95 $ without acetate enhancements).

There were plans for a sequel that were delayed when Ross dropped out, then changed again when Busiek dropped out. The project was eventually released as Chuck Dixon’s “Code of Honor” with painted covers and partial interiors by Brad Parker. Busiek changed his original plans for the sequel to a 2005 script for “Astro City” before returning to Marvel for the 2008 “Marvels: Eye of the Camera.” More recently, the concept has generates various spin off. 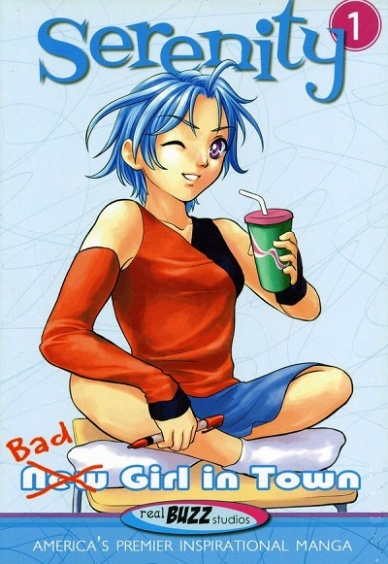 November 2005
Manga was a big deal in 2005, especially among teenage girls. Buzz Dixon was VP of Stan Lee Media at the time and wanted to take on the manga market, but he had to leave superhero-focused SLM to do so. He partnered with Marlon Schulman to create Realbuzz Studios and worked with artist Min Kwon to create “Serenity”. The original plan was to launch it as a magazine, but they made a deal to publish it as a tankoban through Barbour Publishing.Continued below

The story is about Serenity Harper, a young girl who has recently moved to a new town and struggles to fit in because she has a penchant for causing trouble. A group of Christian students decide to befriend her and encourage her to change.

Additional volumes followed, along with other titles. Realbuzz Studios amicably left Barbour and transferred its business to Thomas Nelson, a publisher who also attempted to push the material into mainstream bookstores. Unfortunately, things turned sour between Dixon and Shulman, resulting in a civil lawsuit in California in 2009.

I am considering a format change for this column in 2023. If there is a topic you would like to see covered, please let me know by email. If you are viewing this after 01/01/2023, I will still accept suggestions. Thanks for reading!