You know it’s San Diego Comic-Con news season when we start talking about one of our favorite artists, Patrick Ballesteros.

Ballesteros takes your favorite pop culture characters and fills them with childhood wonder – literally, creating kid-ified versions of them in his signature style. His popular print lines include his “25 Cent Wonders,” which feature imaginary versions of the childhood “rides” you used to find outside stores populated with all your favorite characters, and “Can You Hear Me Now? “, where any combination of characters are just a tin can call away to communicate.

This year for San Diego Comic-Con, he worked on new exclusives, debuts, and more. Interested in a commission? Its commission seats will open at 10:00 a.m. PT on Monday, April 25. It will open around 25 places, so be sure to email [email protected] with the subject line 2022 SDCC Commissions if you are interested.

Let’s take a look at this year’s offerings at Artists Alley #DD-08:

This upcoming Patrick Ballesteros debut just might give you a herogasm. This 6″x8″ print is a “great” addition to its 25 Cent Wonders line, featuring your favorite pop culture characters atop a “ride”. Butcher and the gang are all here in this print, titled “Oh no no no no no“, which will be an open edition, which will debut at San Diego Comic-Con for $12.

The multiverse can be a crazy place – and a little disorienting. But this new 11″x11″ print by Patrick Ballesteros is anything but.

The open edition print can be hung in four different ways, to give each multiverse its due. “Is this the witch’s way?will debut at SDCC and will be available for $30. 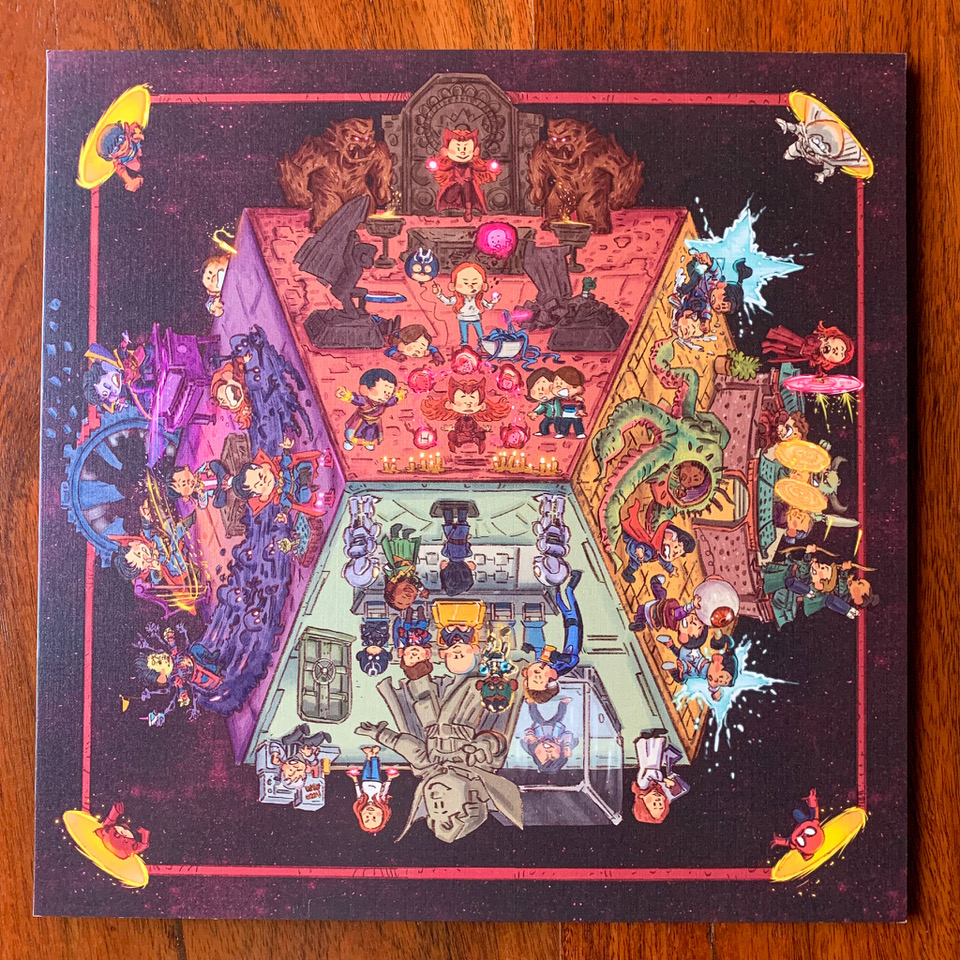 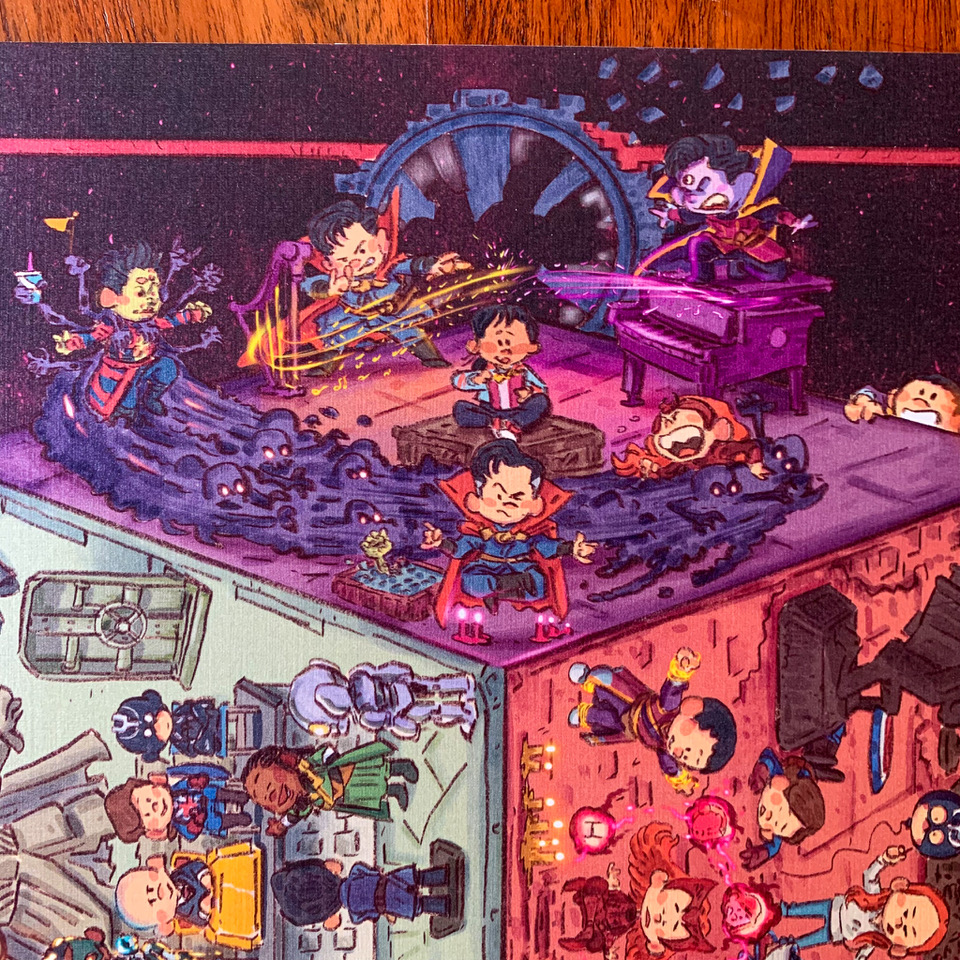 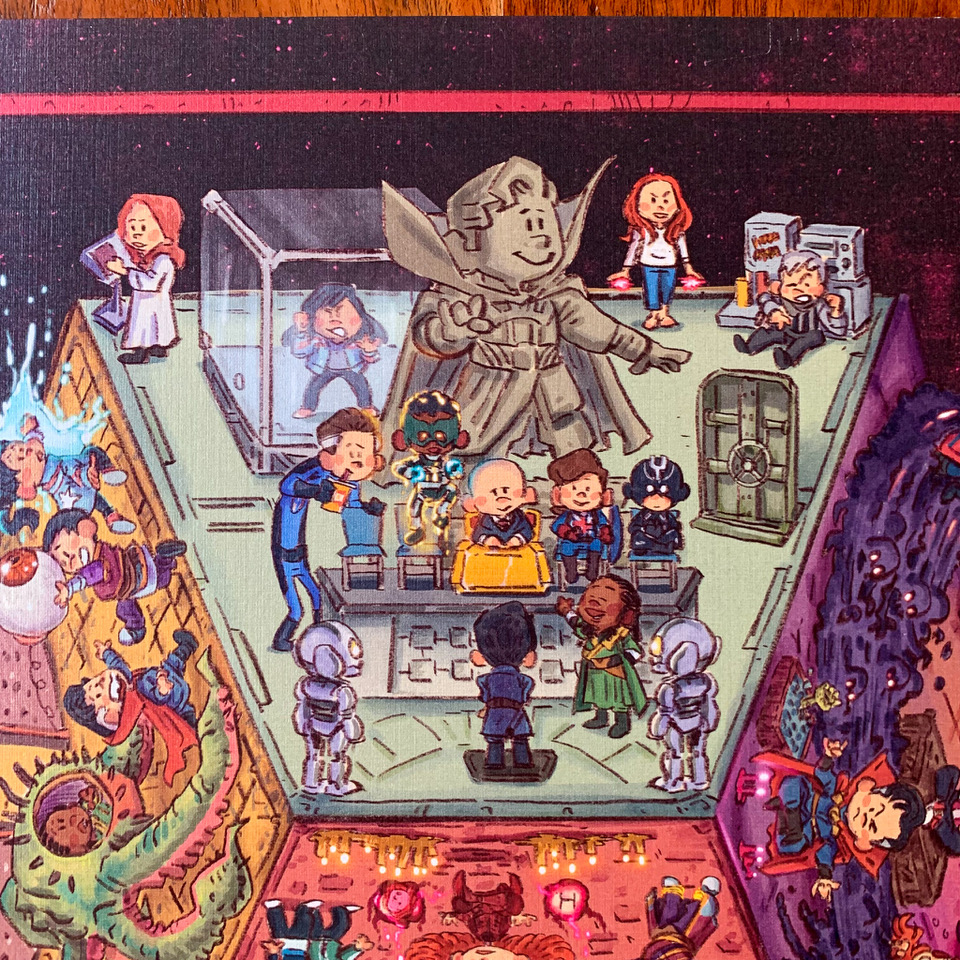 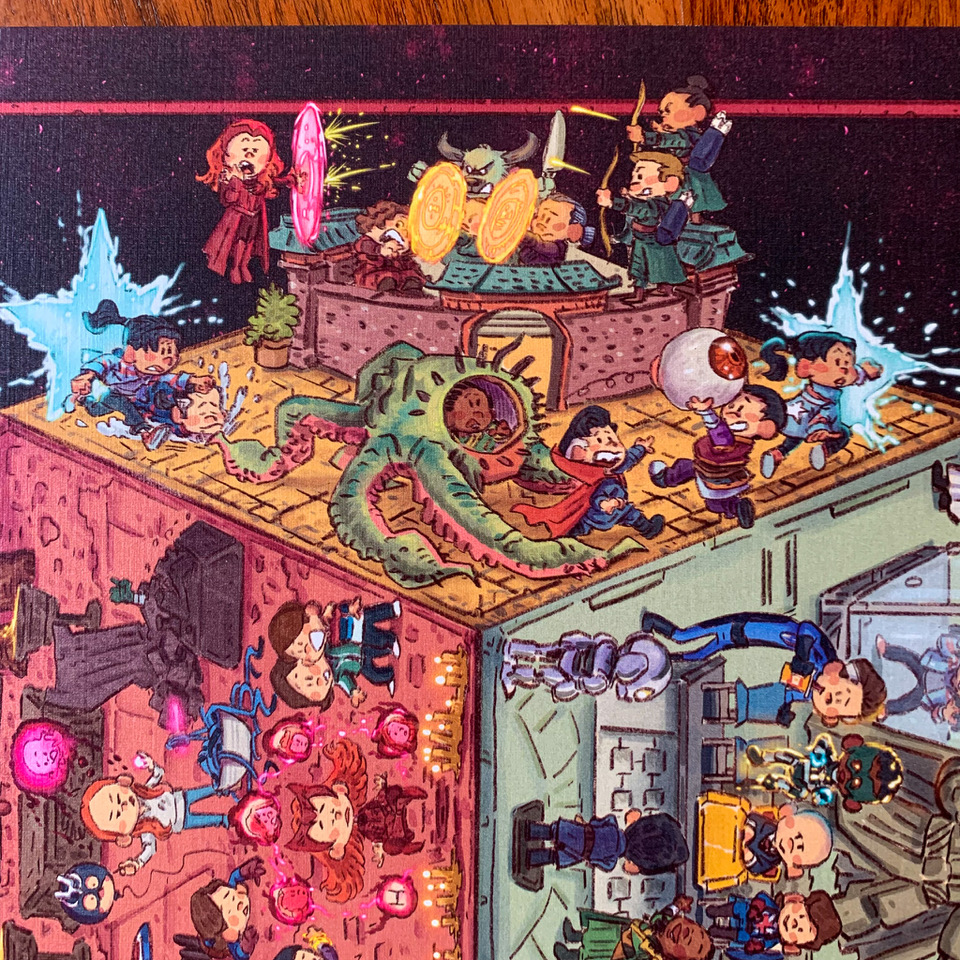 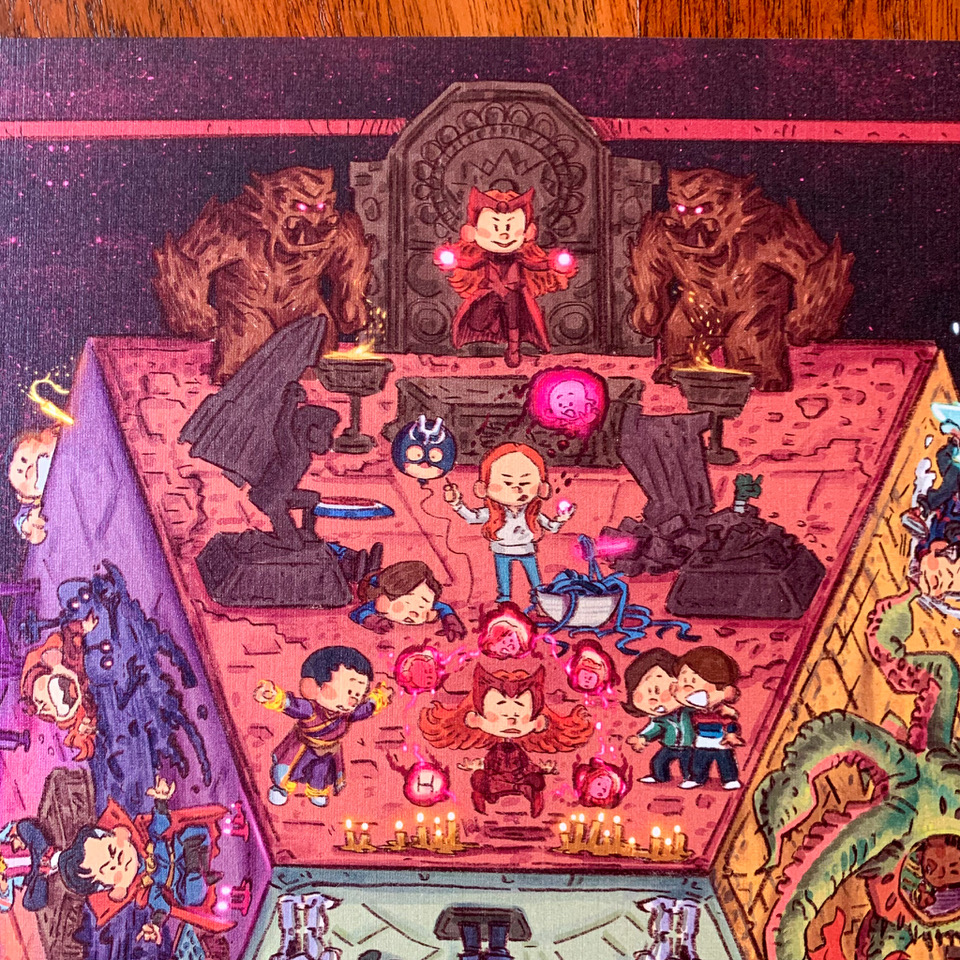 You can ride with your “homies” in the latest impression of Ballesteros, which will debut at Comic-Con in San Diego next month. They say never meet your heroes, and that’s doubly true with Homelander and the rest of the supes in this new 6″x8″ print, titled “friends?”

Like the other The boys print, it will be $12 and an open edition – but making its con first appearance. You’ll be able to pick it up any day of the convention, so be sure to stop by booth #DD-08 in Artists Alley. 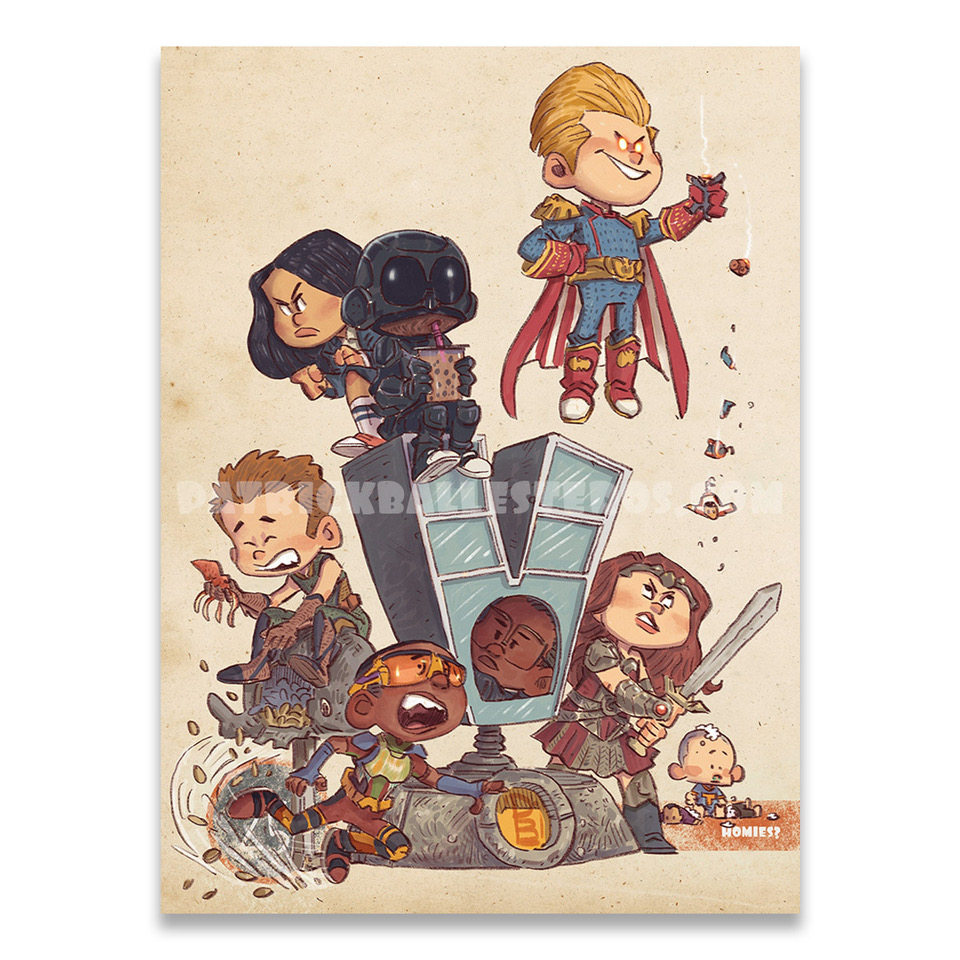 The boys are back in town in this new print from Ballesteros, which will debut at the convention next month. The 6″x8″ 25 Cent Wonders features Butcher, Hughie and the rest of the gang as they take on Soldier Boy. “The New Boys and Girls Clubwill be available at the Ballesteros booth at Artists Alley, #DD-08. 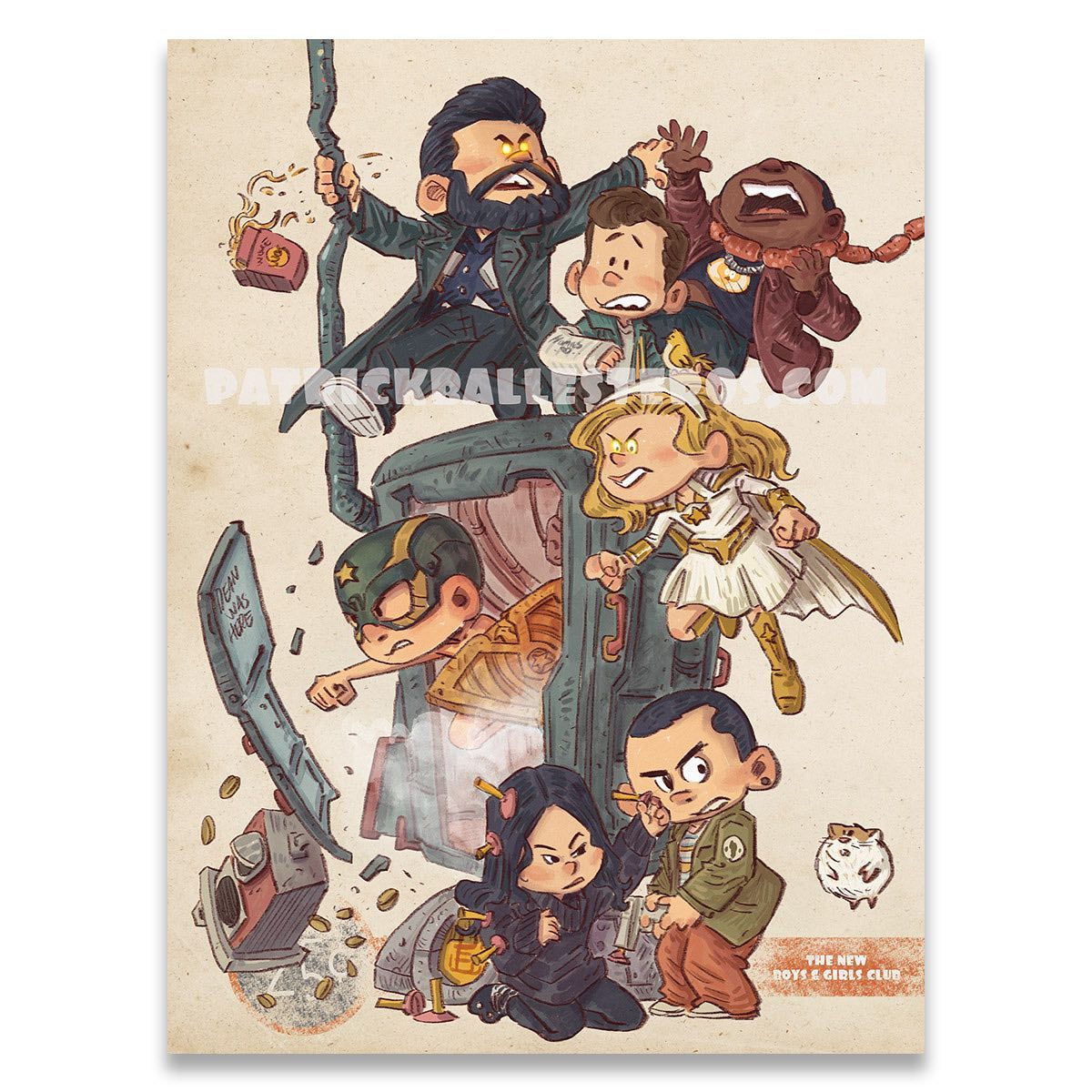 Ballesteros has another tribute to the best movie of the year (and if you haven’t seen it, run – don’t walk). This 10″x10″ print features a multiverse of more than madness – it’s a multiverse of everything, everywhere.

And you can decide which multiverse is your favorite, because you can spin the print in any direction and it still works.

The room, “You are my everythingwill be available for $25 at the show and is printed on pearl linen. 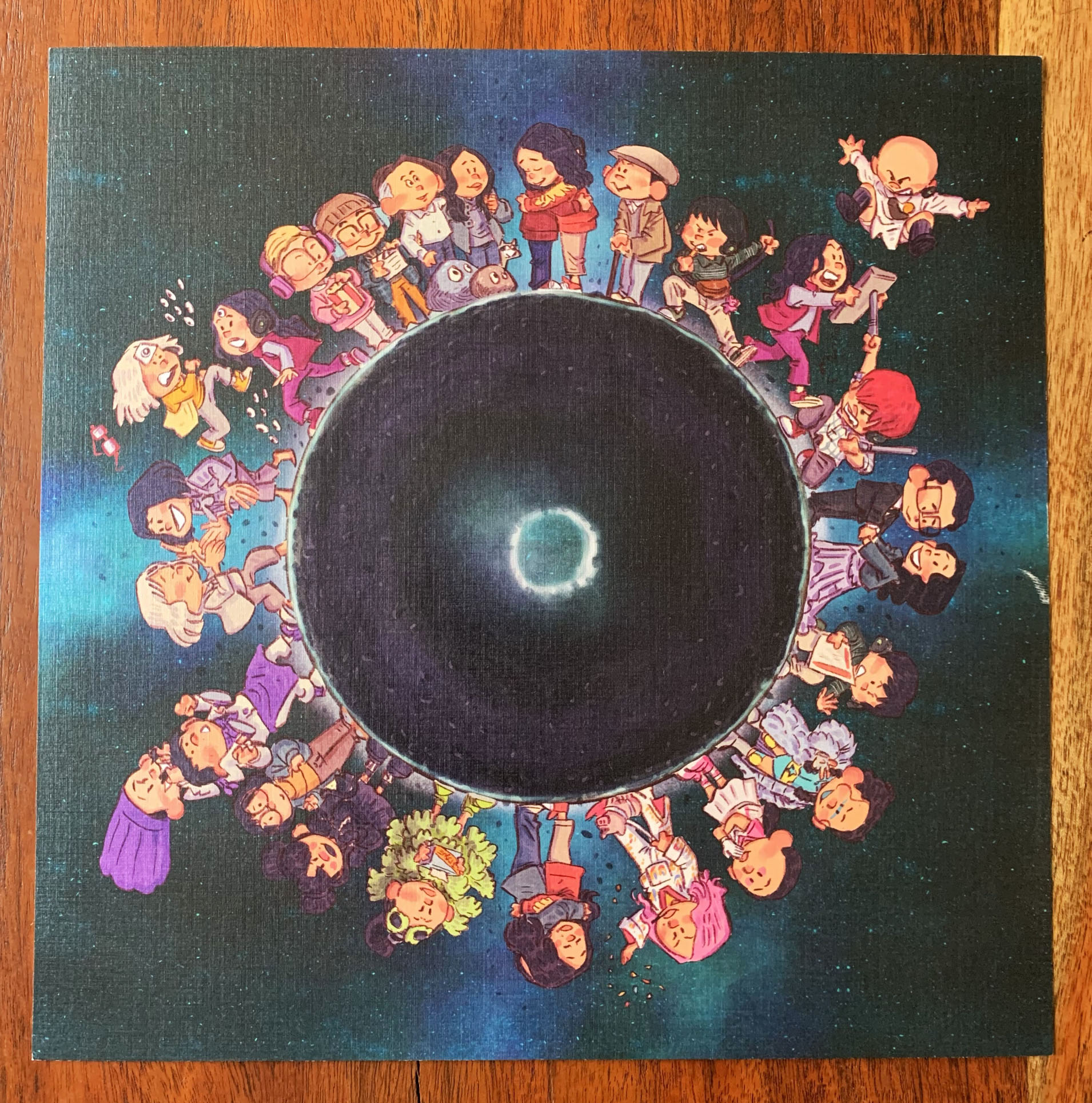 You don’t have to be a furry time bomb – because you can score this Ballesteros 25 Cent Wonders”No Turn on Red“San Diego Comic-Con exclusive print.

The 6″x8″ piece features Mai and her friends and family in all their glory, and is limited to just 100 pieces at the convention. Each is signed and numbered by the artist, and you can pick it up for $16. 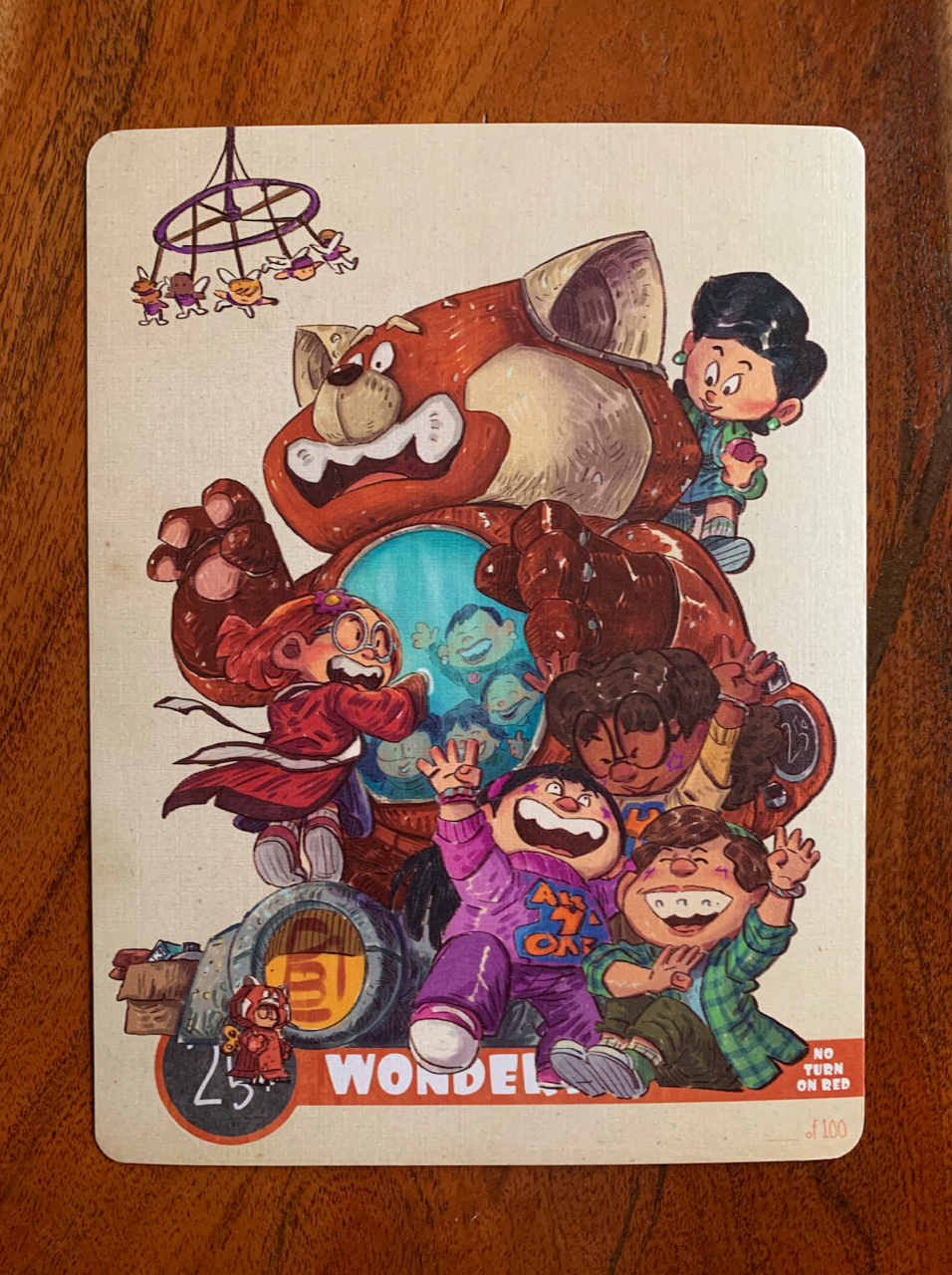 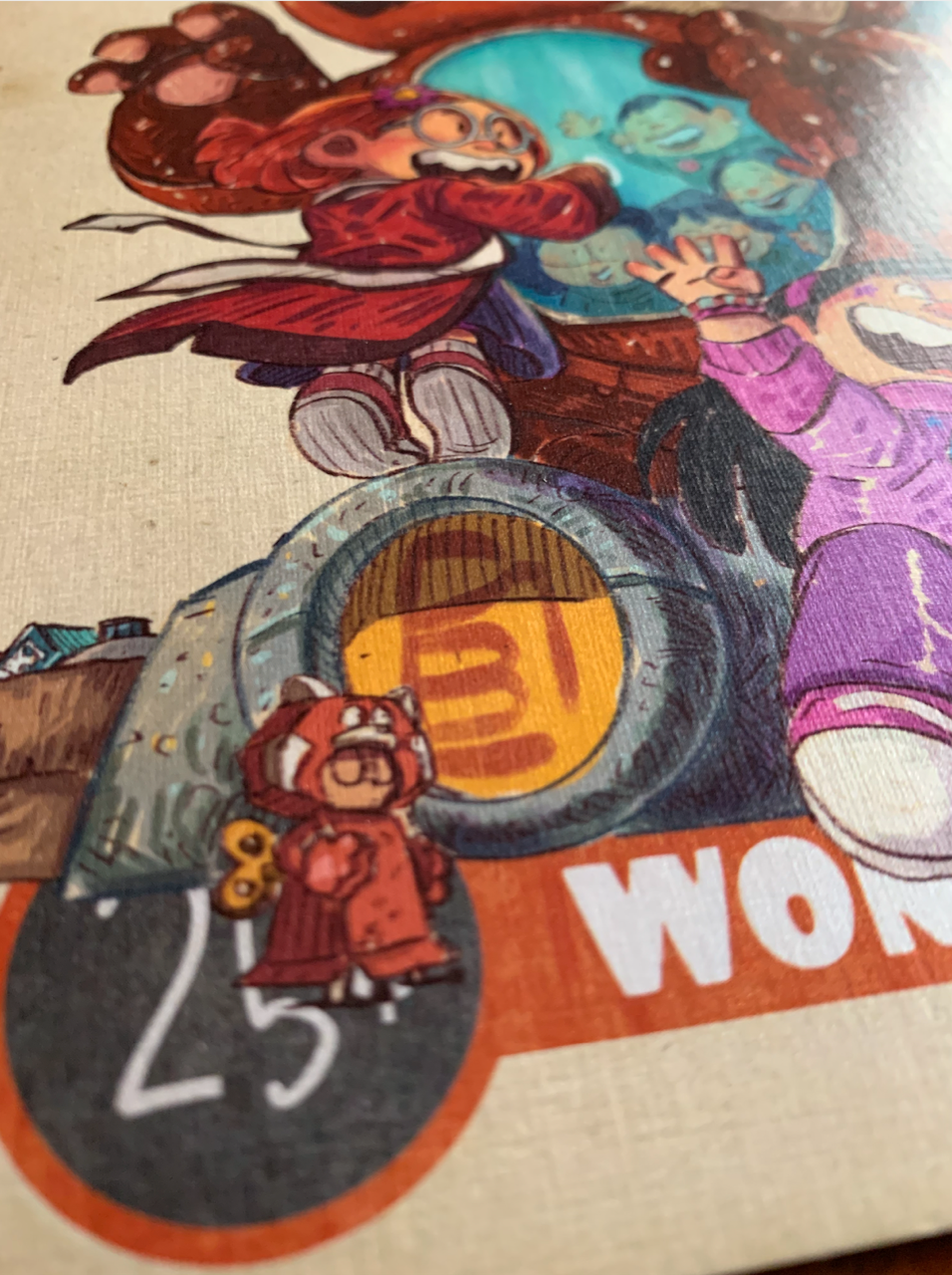 Get your #WeAreRichmond hashtags ready and get ready to believe you’ll be tagging these Ballesteros pin sets. The first one, “Wonderboy and evil trainer“, is about the duality of man (or at least Nate), and features two 1.5” magnetic pins on gold-plated hard enamel. Because they are magnetic, you can change faces to choose your allegiance.

You can pick up the set for $15 at the convention. 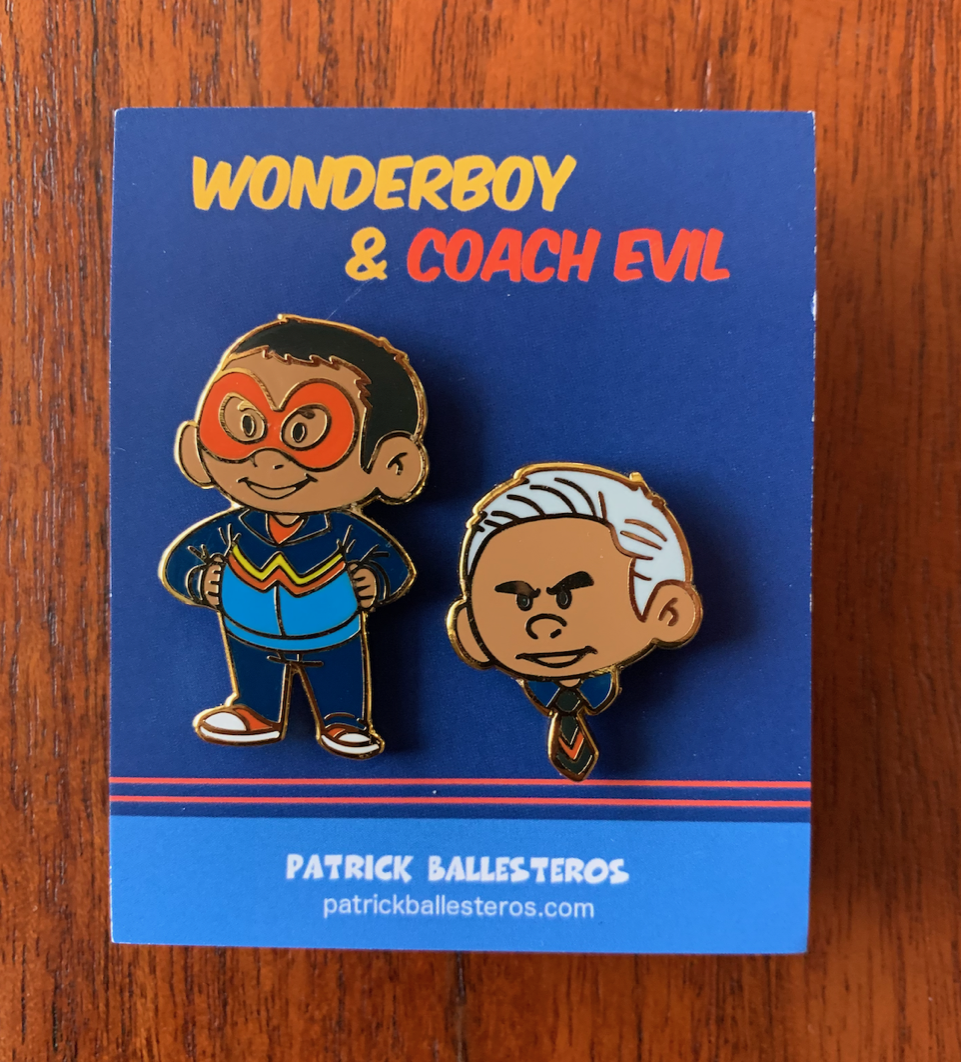 Then it’s “Boss Beez“, all about best friends who work hard in Richmond. The 1.5″ tall brooch is also gold plated hard enamel and will be available for $12. 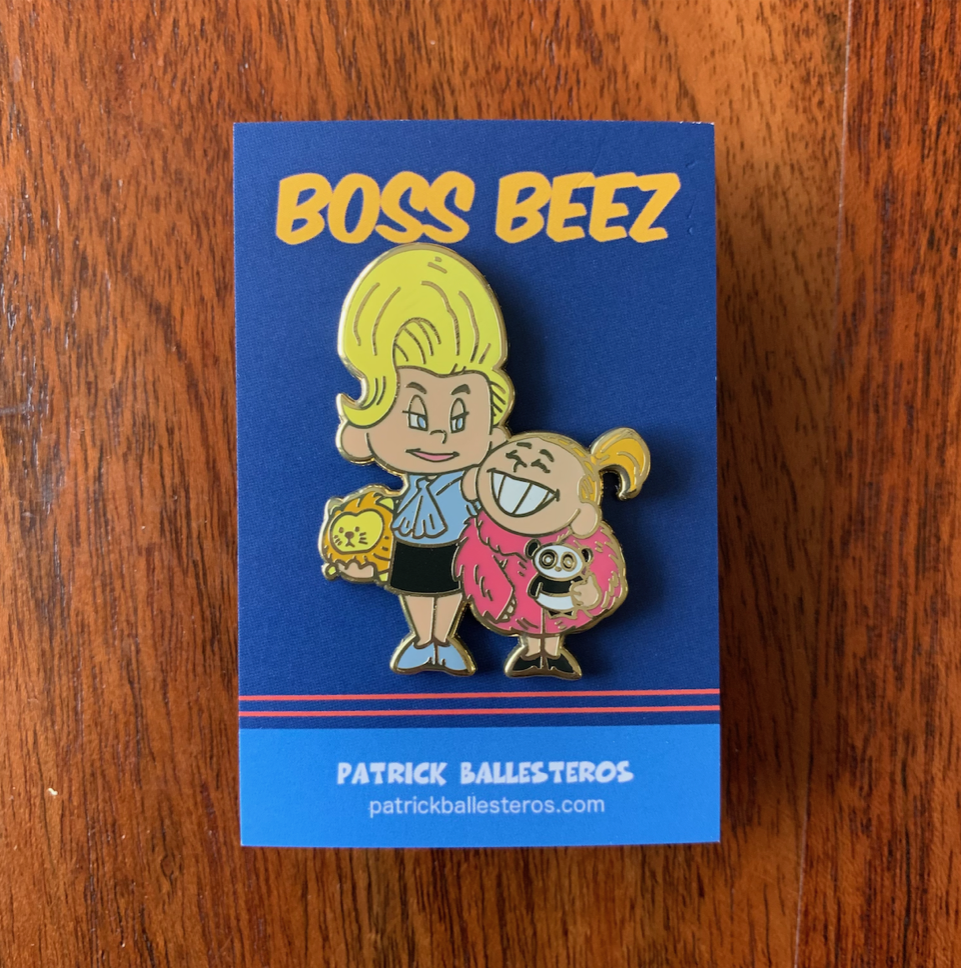 Oh, the life of a pirate, sounds good, sounds good… Get ready to head to the Ballesteros booth to pick up this 10″x10″ open edition print debuting at San Diego Comic-Con, dedicated to gentleman pirates, Krakens, singing Swedes and everything in between. The whole pirate team is here, along with some formidable enemies. We love the details in this piece, from the way Stede and Ed still toast each other with tea, to Roach’s patented orange glazed cake. 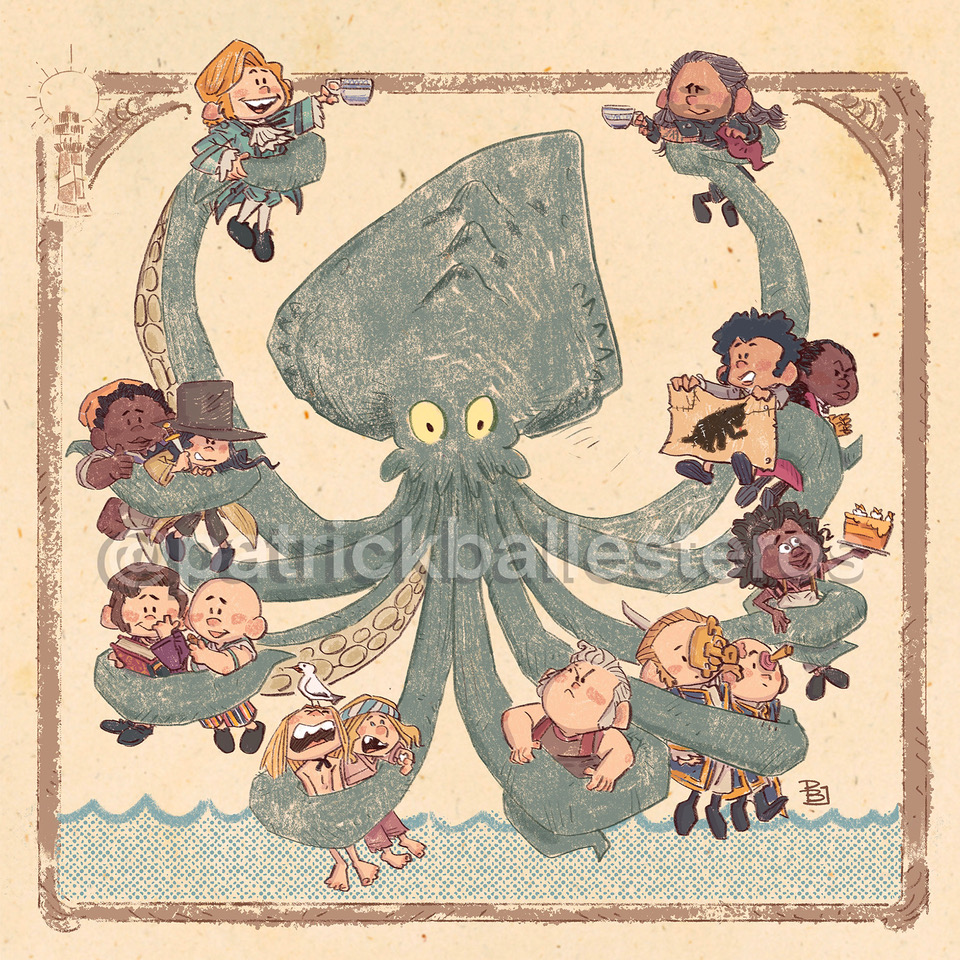 Ballesteros’ next piece making its convention debut is all about the pirates talking about it as a crew. So wave your pride flag high and hop on over to Blackbeard’s Bar & Grill (& Other Delicacies & Delights & Fishing Equipment). This piece will be available as a sticker – and if we’re very lucky, maybe more – damn it. 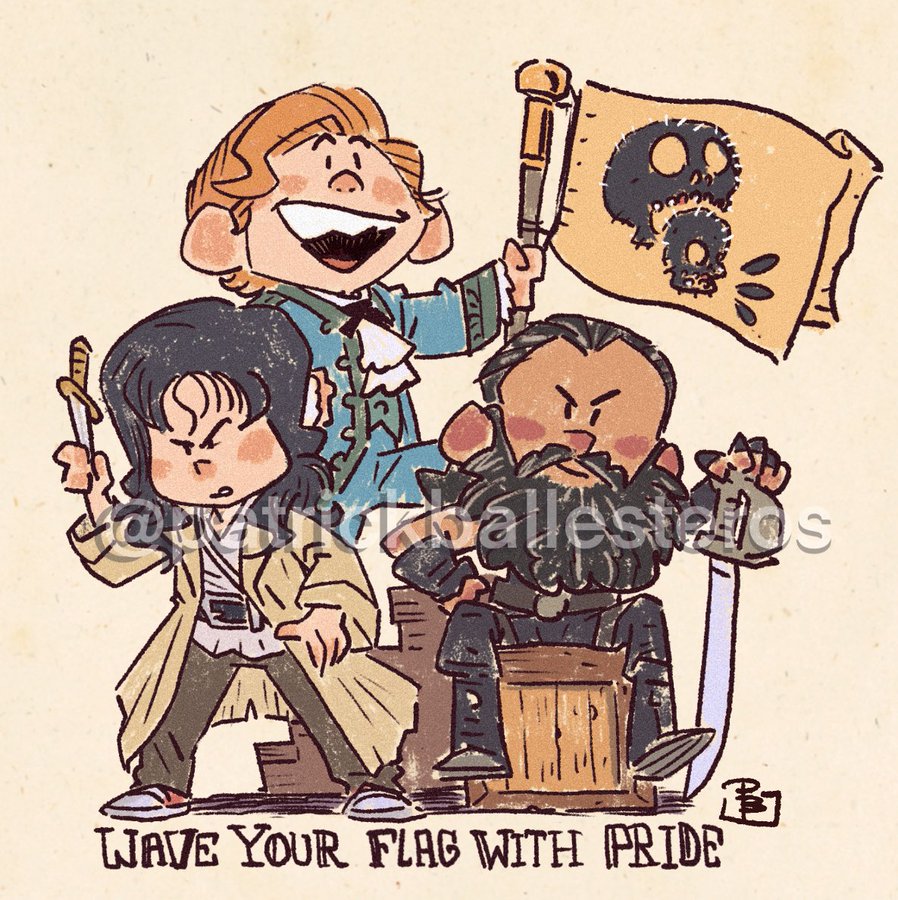 They say you can’t go ‘home’ anymore – but we feel like we’re back with the final reveal of Ballesteros”Nothing better than being at home» triptych.

The final 6″x8″ print is titled “Strange times‘, and features everyone’s favorite Master of the Mystical Arts and a certain webhead. 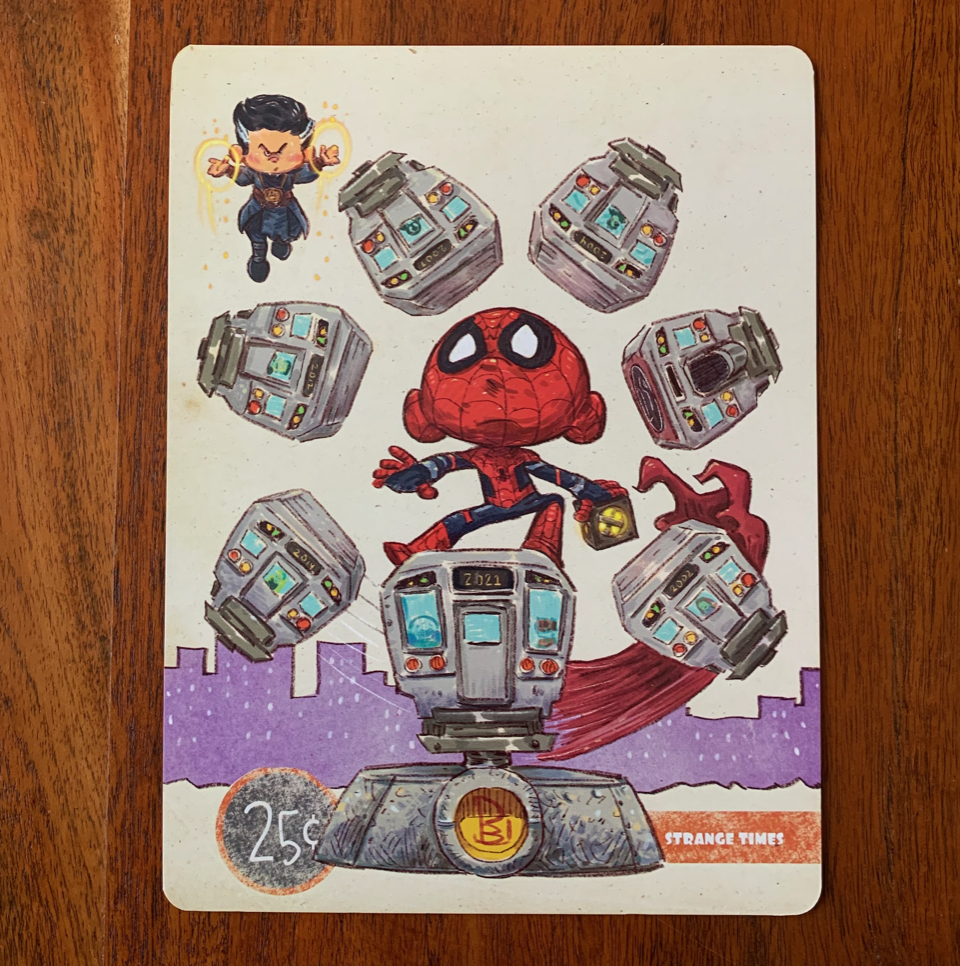 It combines with the other two prints in the series — “take two” and “Help” – to form a triptych featuring all your favorite characters and moments from the film. This open-edition set will debut at San Diego Comic-Con, where you can get each print for $12, or take advantage of a special con and get the full set of three for $30. 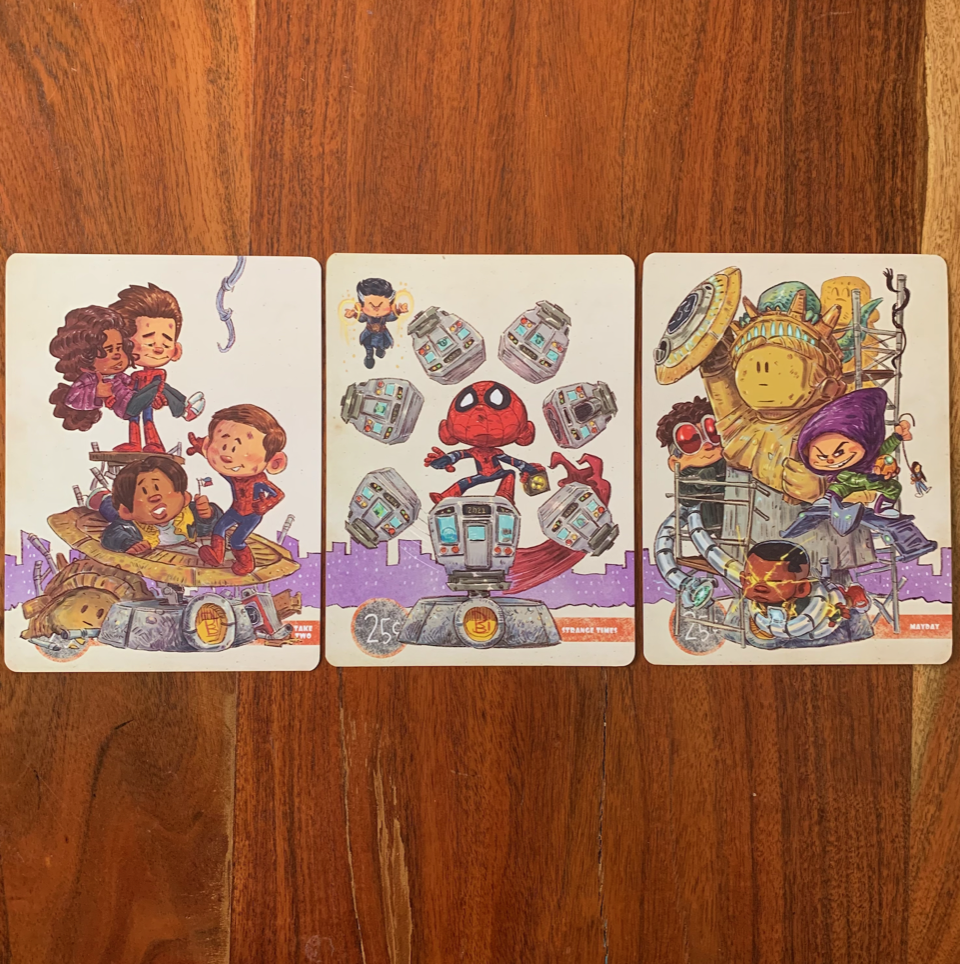 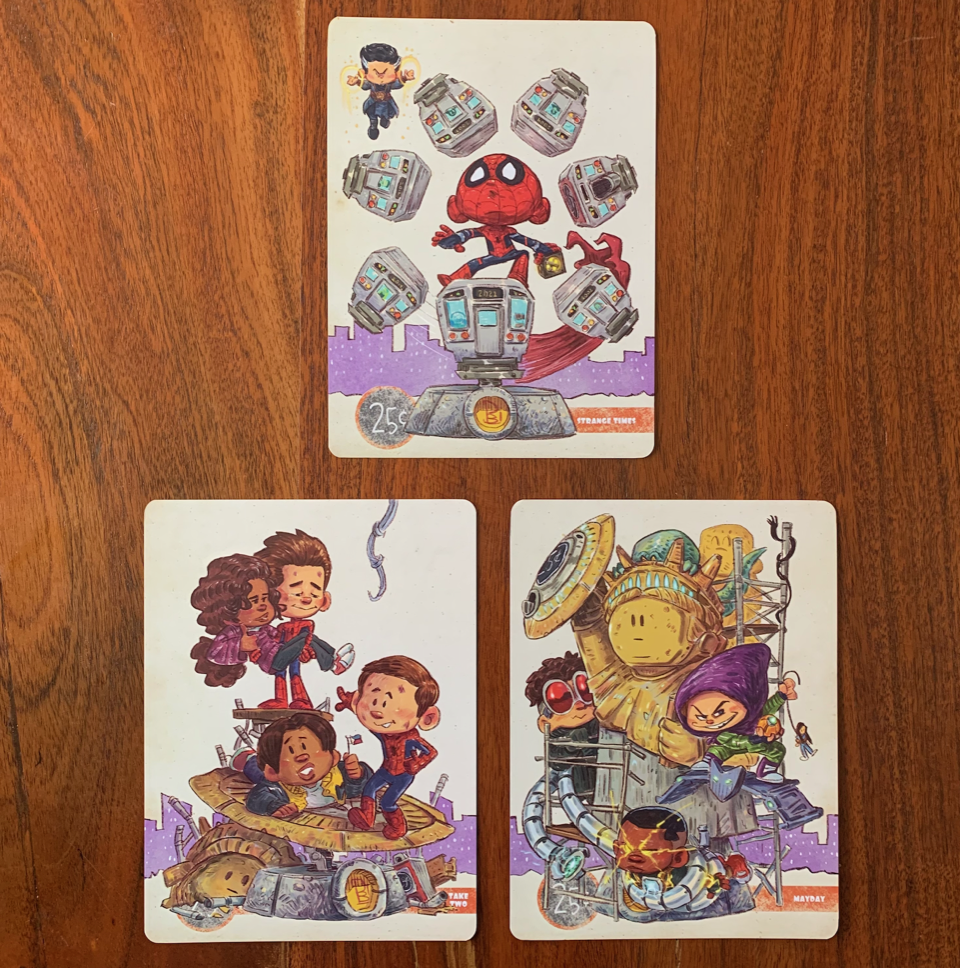 Many of us have been going through something of a ‘moon phase’ lately – and if you also feel a total eclipse of the heart when thinking about these characters, you’re going to want to grab Ballesteros’ latest San Diego comic – Exclusivity.

Entrants can pick up this fun 8″x8″ mash-up titled “moon lightingat the convention for $20. It is printed on fine art perlé linen and limited to only 150 copies.

We love the swirling cosmic colors of the night sky – and this deviates a bit from the usual Ballesteros prints, while still retaining its kid-ified personas. 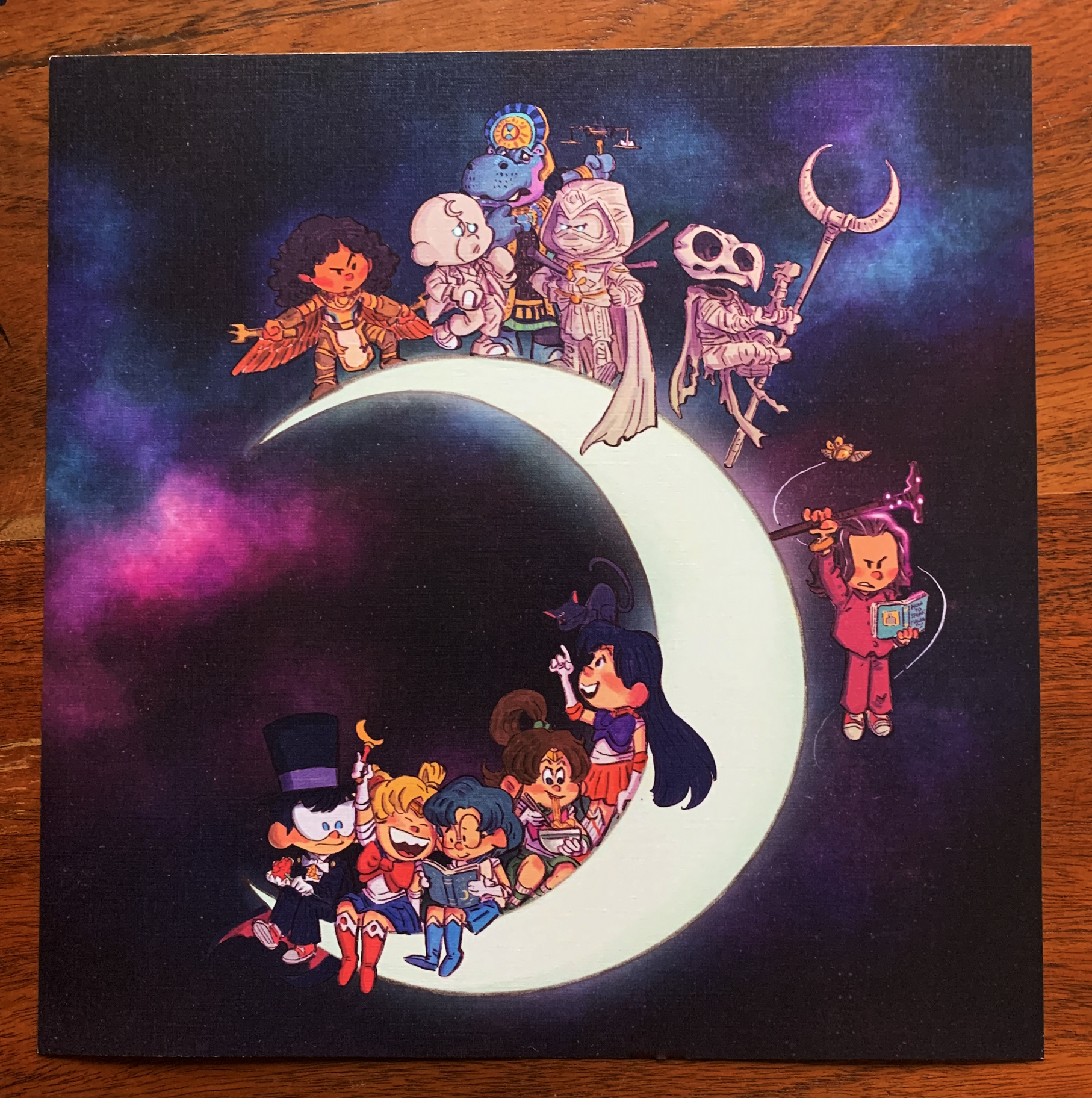 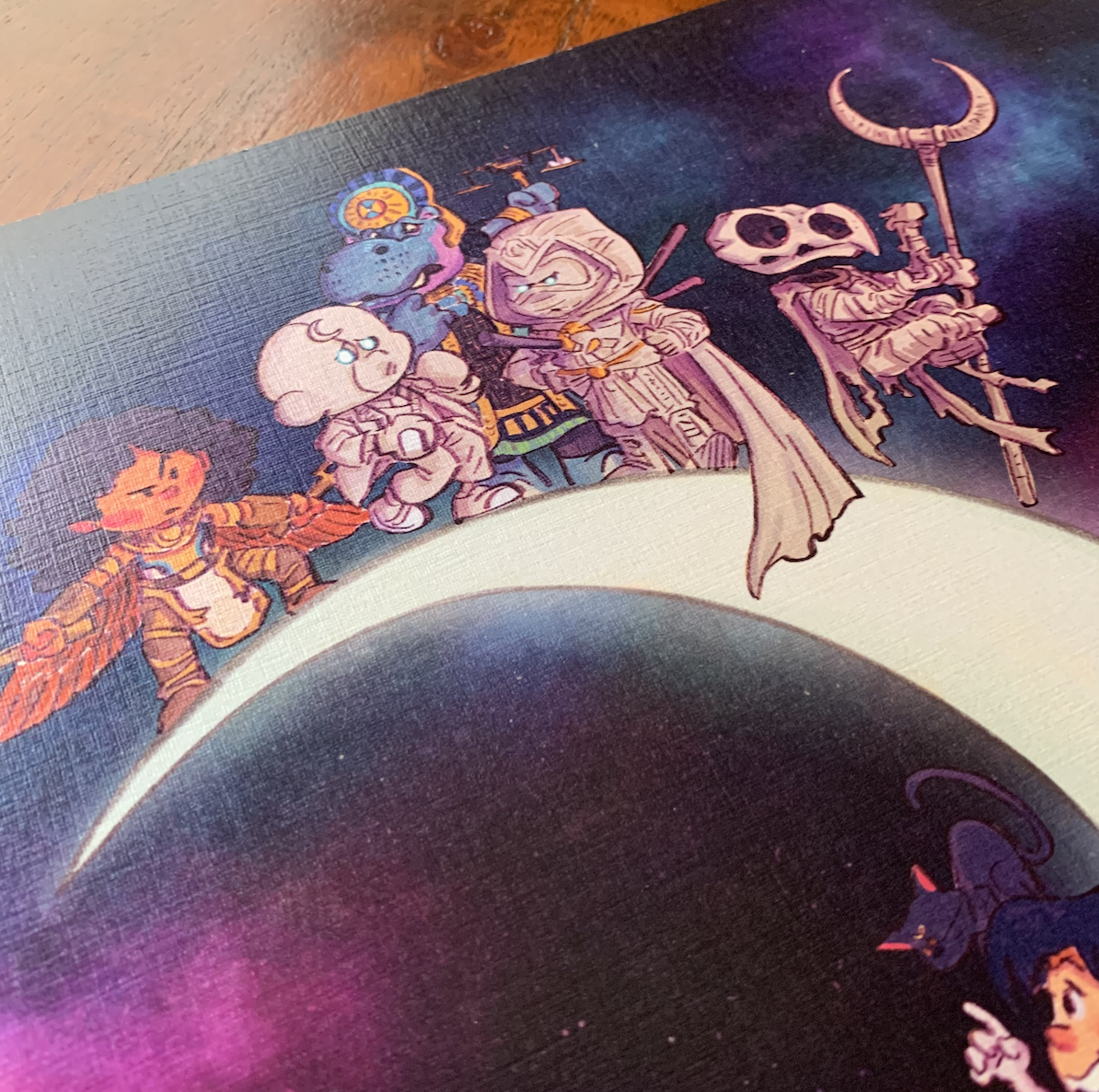 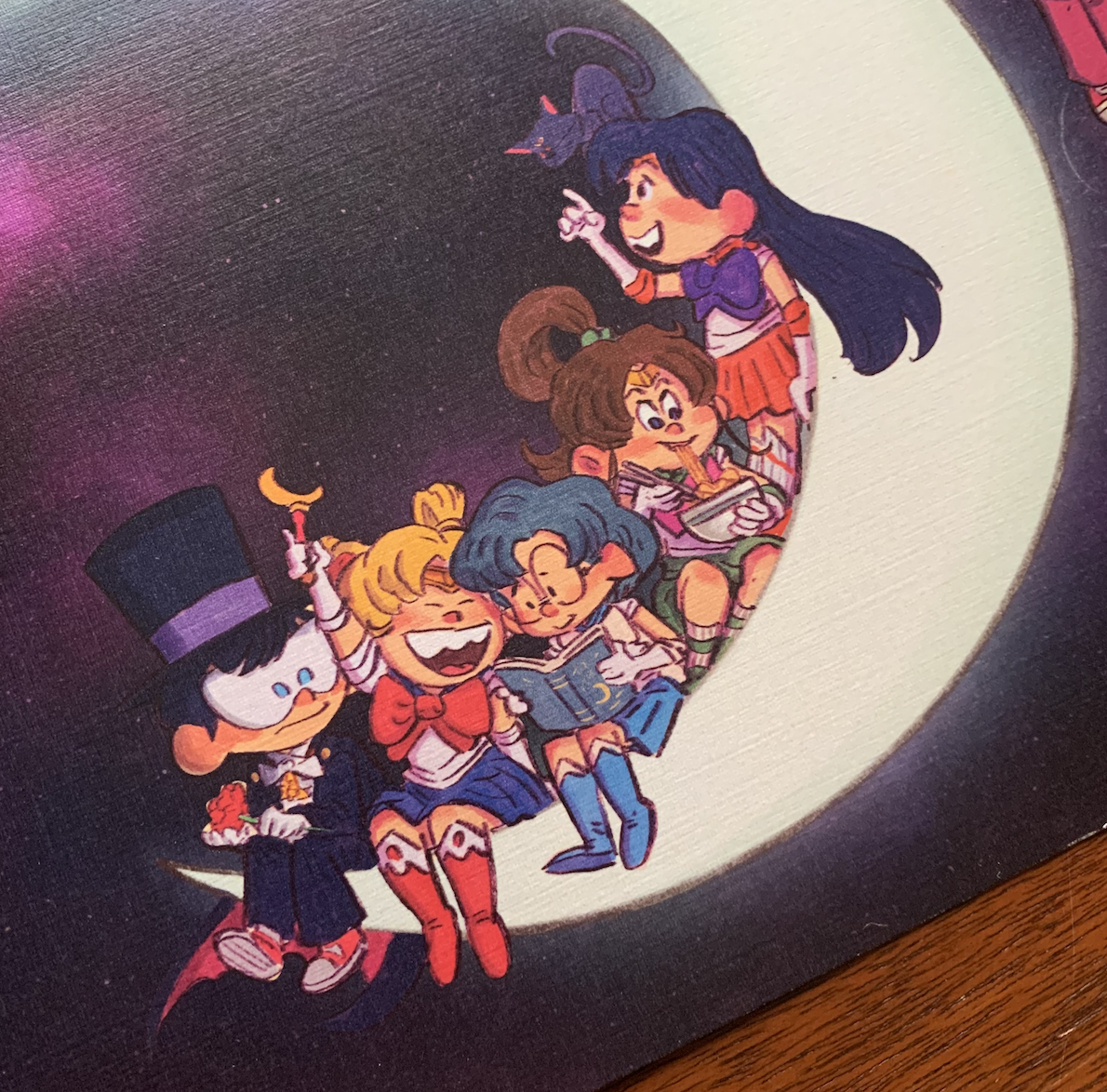 Are you addicted to Boba? If so, there’s no need to offer a bounty, because Ballesteros has your solution here. “Boba’s shopis coming to San Diego Comic-Con as an 11″x14″ print for $25, an open edition debuting at the con, which will be available daily.

The only question then is, which flavor is your favorite? 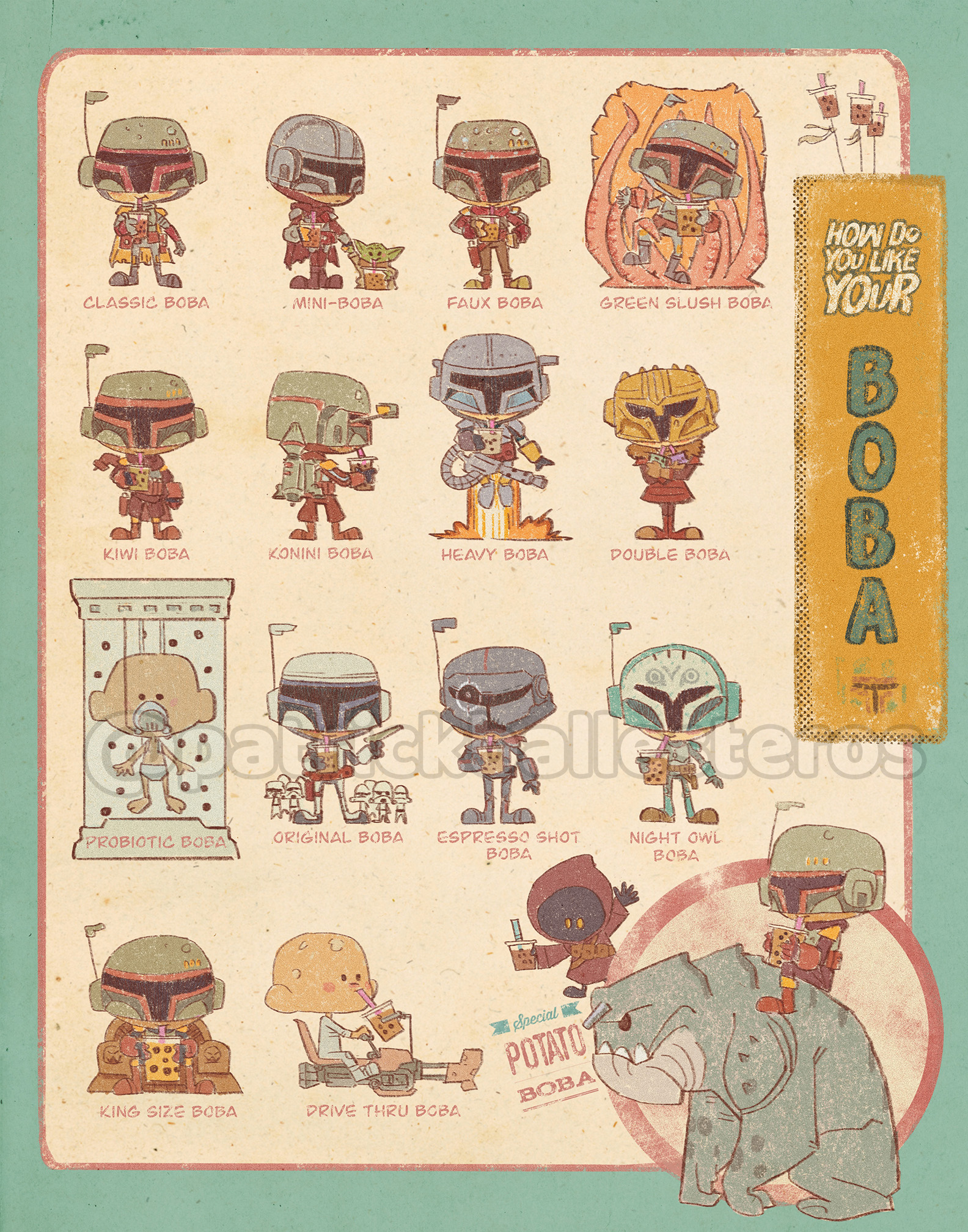 Don’t despair over an Everything Bagel – because you can find it all, anywhere with Ballesteros’ latest impression making its convention debut.

This 6″x14″ print, titled “Whiten the Multiverse», is a tribute to the best film of the year (in our humble opinion). It has more dimensions than you can shake a Raccacoonie, and finding all the details hidden inside seems way more fun than a trip to the IRS.

The print, which is on Fine Art Pearl Linen, is limited to just 150 pieces and will be available from SDCC for $30. 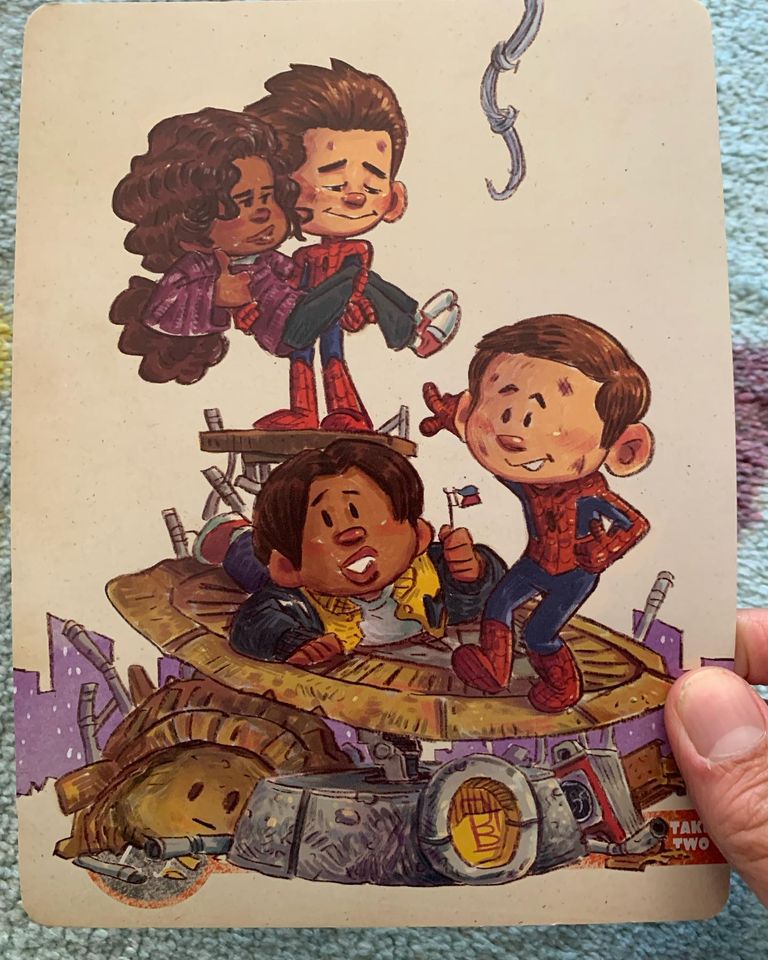 For many of us, John Williams marked our childhood (and most of our adult life). His music has stolen the show from many of the most iconic franchises of the past decades, including star wars, IndianaJones, jurassic park, Alone at homeand Harry Potter – as good as Jaws, Superman, AND the extra-terrestrial, Dating of the Third Kindand countless others.

Ballesteros’ last print, “Mr Williams’ Opuspays homage to both the man and his musical heritage. This 11″x14″ print will debut at Comic-Con this summer for $30, in an edition size yet to be determined. Each print will come signed by the artist. 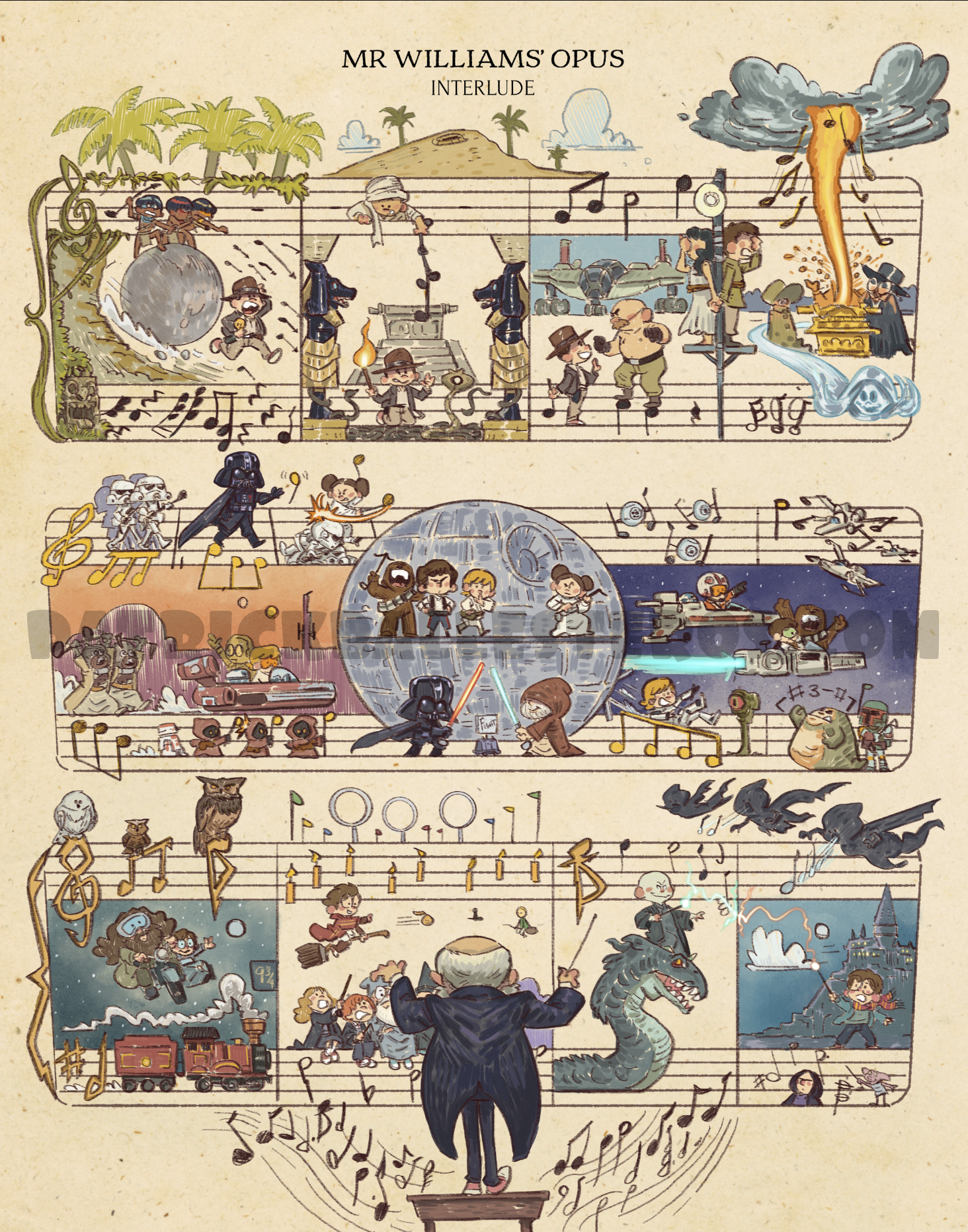 Up first is the start of a new three-part exclusive, featuring some webheads’ worst nightmares. The piece, titled “Help”, is a 6″x8″ print. The size and price of the edition are yet to be determined, but we’ll be bringing you more soon. 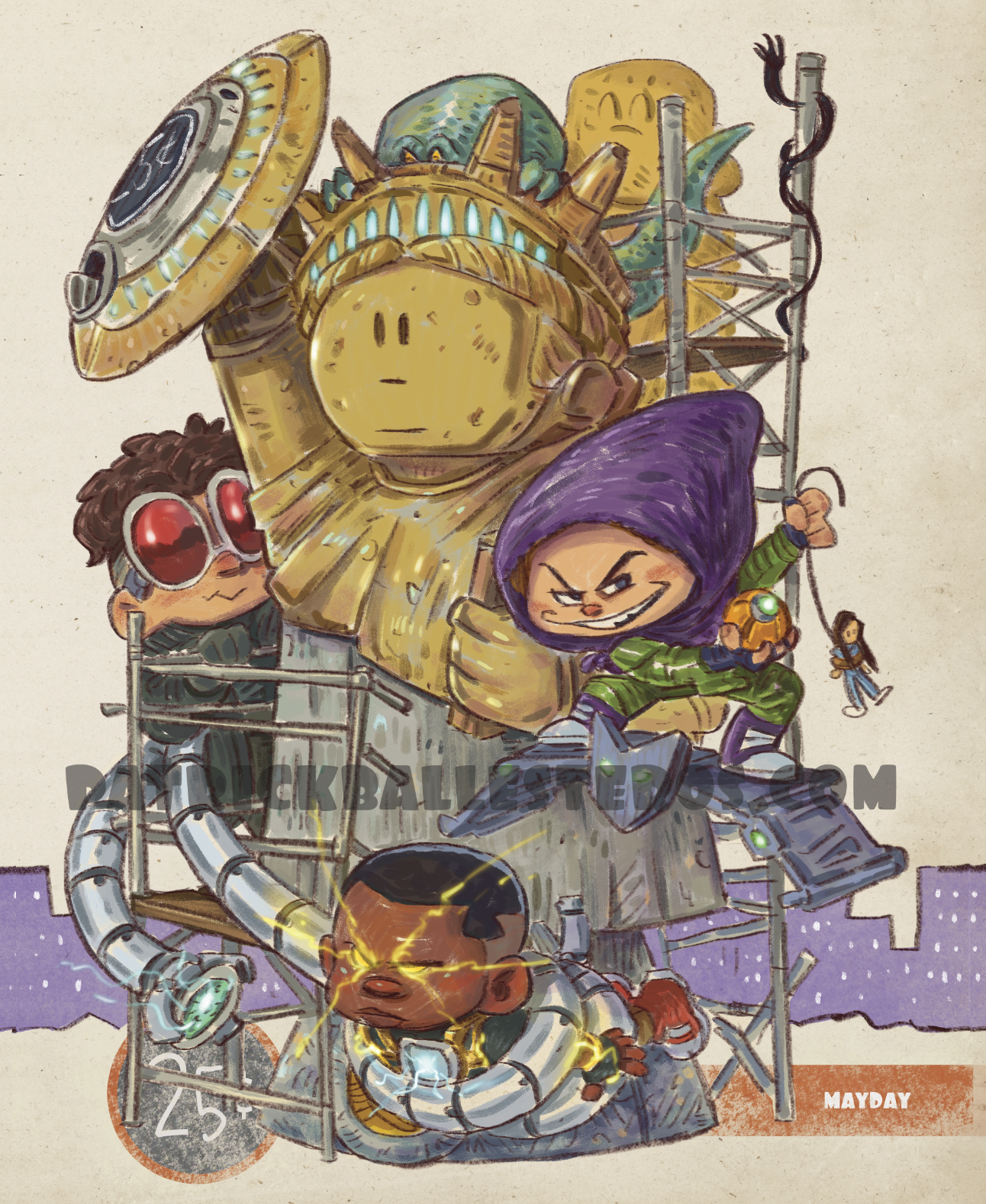